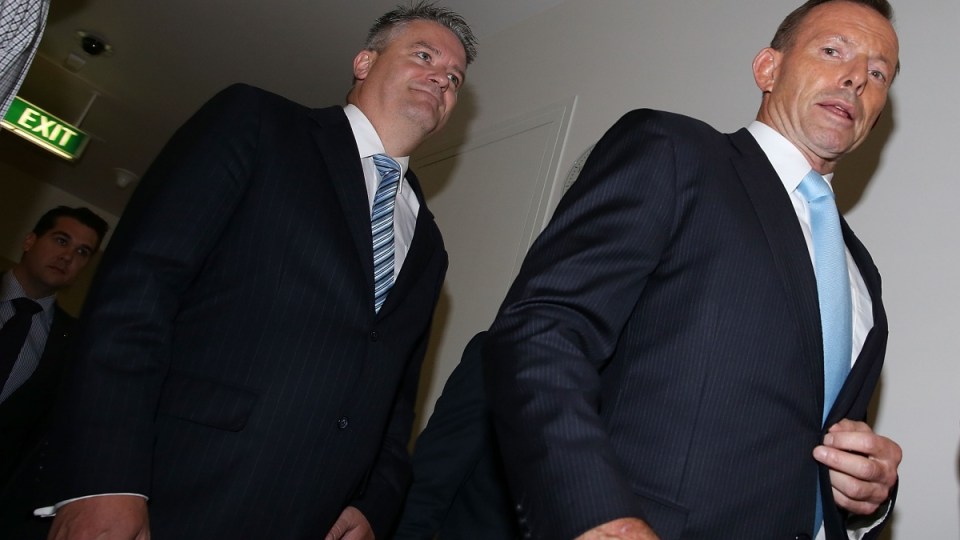 The two recently had a "man-to-man" talk. Photo: Getty
analysis

There’s just one man standing between Tony Abbott and a return to the prime ministership. That man is Mathias Cormann.

Senator Cormann is the most disciplined of the government’s ministers when it comes to delivering the party line to the media and, by all accounts, probably the most loyal.

So when he strays from the script to criticise one of his colleagues, it’s for a very good reason.

This week saw the second time in a few months that Senator Cormann has felt it necessary to publicly tell Tony Abbott to pull his head in.

The slap-down was significant because the Senator was one of Tony Abbott’s staunchest supporters. He’s one of the Liberal Party’s conservatives, he did the numbers for Mr Abbott for the last leadership challenge, and he voted for Mr Abbott on the day.

But the Finance Minister is loyal to his party overall, and will do whatever is necessary to defend it – even if that means having to discipline one of his previously close colleagues.

Tony Abbott didn’t take well to the public dressing-down from his former mate, and recounted to loyalist radio host Ray Hadley this week that he gave the Minister a smack in return, noting also that Senator Cormann should have done him the courtesy of contacting him privately first.

Claiming he had a “man-to-man talk” and “a very blunt conversation” with the Minister “about that particular outburst of his,” Mr Abbott told Mr Hadley that “if you don’t like what someone is doing, rather than speak out publicly, at least in the first instance, you should have a man-to man-discussion”.

If this aggressive vignette was meant to dissuade other colleagues from criticising his latest burst of “outspokenness”, Mr Abbott was initially successful. Aside from Warren Entsch, who will probably never forgive Tony Abbott for fooling him with the gay marriage plebiscite, most other government MPs parroted their former leader’s line that he was entitled to speak out.

The self-styled heir to Abbott’s conservative throne, Immigration Minister Peter Dutton, unsurprisingly over-reached, saying Mr Abbott should be “applauded” for doing so because it was all about keeping Bill Shorten out of the Lodge.

Except that we know it’s not. Mr Abbott is intent on revenge, according to his friend and conservative columnist Cate McGregor who let the cat out of the bag this week.

Similarly, Mathias Cormann remains unconvinced that Tony Abbott’s motives are pure, and it seems that Mr Abbott’s boast of a touch-up was enough to bring the Cormanator back to the airwaves on Friday.

Senator Cormann advised that he did in fact speak to Mr Abbott in private first, but that his warning had no effect. The Minister also re-affirmed everything he said back in February, and cautioned that while Mr Abbott was entitled to speak out, as a former prime minister he had a particular responsibility.

He noted that some of the former PM’s “interventions in the past sadly have been somewhat destructive” and could be seen as undermining the government.

“Tony has got to be very careful that he’s not and he’s not seen to be helping Bill Shorten,” Senator Cormann warned, emphasising the need to work “as a strong and united team” to prevent inadvertently helping the Labor leader become prime minister.

If anything can stop Tony Abbott on his revenge rampage, it will be this, because Senator Cormann is the key to success at the next leadership challenge.

Peter Dutton may be described as the (next) leader of the Liberal conservatives, but Mathias Cormann shares Mr Dutton’s role as the most senior of the young conservatives. And it is this bloc of votes that will make or break the fortunes of any aspiring Liberal leader.

Minister Dutton’s comment that Mr Abbott should “be applauded” will not go down well with conservative colleagues who want to remain on the government benches after the election. They know disunity is death.

The same colleagues will also be worried about the potential for Mr Dutton’s other comments this week – concerning a young boy on Manus Island – to escalate into another “children overboard” political disaster.

With the chances increasing each day of Peter Dutton managing to discredit himself as a leadership contender, the young conservative bloc will look to Mathias Cormann for guidance.

And judging from the way he dealt with his former leader in February and on Friday, it appears there is very little prospect of Senator Cormann directing that bloc of votes to support a Tony Abbott sequel.

Only the Cormanator can keep Abbott out of The Lodge