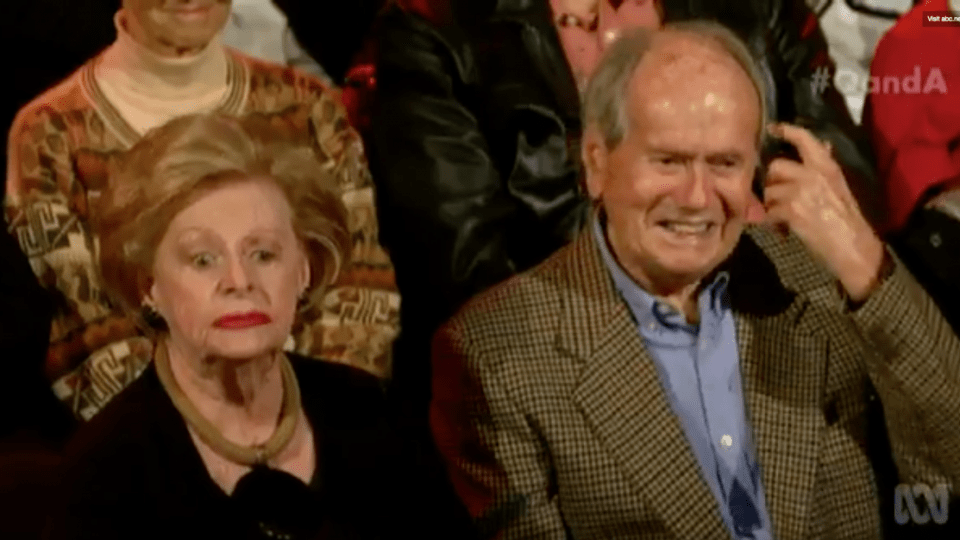 An elderly woman has called “bulls**t” on claims that likened euthanasia to “intentional killing” in response to her Q&A plea for the right to die.

The 81-year-old and her 90-year-old husband, Ron, told the Q&A panel they intended to seek some form of euthanasia when they can no longer care for themselves, as they did not wish to live their final years in an aged care facility.

“We have told our children about our wishes. They have, albeit reluctantly, agreed to our wishes,” Ron said.

Margaret Somerville, the founding director of Montreal’s McGill University Centre for Medicine, Ethics and Law, said: “How you die does have to do with the community.”

Earlier, Ms Somerville had said she was against euthanasia because the risks and harms of “legalising doctors to be able to take the lives of their patients by inflicting death intentionally is so dangerous that we shouldn’t allow it”.

“And ultimately, if what we’re doing in society is changing the law to allow this type of — putting it bluntly, killing — then it is a seismic shift in our values as a society, and it doesn’t uphold respect for life at a societal level.”

Ron’s wife, who wasn’t identified by name on the program, said the elderly couple were in good health and did not plan to take their own lives until they needed to.

“It’s not about killing anyone. We will be doing it ourselves. I’m not asking Ron to kill me. I will do it myself. And Ron will do it himself,” the 81-year-old said.

“I don’t know what you’re on about, darling, about killing. That is definitely the wrong word to be using.

“… And it’s got nothing to do with the community, darling. It’s to do with our family.”

Why would you want to interfere with our wishes to access euthanasia? Margaret Somerville & @NikkiGemmell respond #QandA pic.twitter.com/qZyh7ZsOWI

Author and panellist Nikki Gemmell shared a personal story about losing her mother to suicide.

Her mother suffered from chronic pain and made the decision alone to end her own life.

“She had investigated the euthanasia situation in this country and she realised that to protect us she would have to go alone. And she died a very bleak and lonely and desolate death without any love and without her family around her because she was trying to protect us.

Senator Mitch Fifield contributed a controversial claim about palliative care, causing the audience to audibly gasp, before making a quick recovery to clarify his stance.

He said Australians were living longer, healthier lives, with the 5000-strong contingent of Australian centenarians predicted to rise to 50,000 by 2050.

“Both of my parents passed away about 20 years ago. And in each case their deaths were hastened by good palliative care. Good palliative care can bring a death forward … Sorry. Let me explain,” Mr Fifield said.

“My view is that sometimes it’s a good thing when there is space in the law that allows families, that allows doctors, and allows patients to manage their situation.

“Perhaps because this is a personal experience, I’m not expressing it as clearly as I might otherwise. But my point is that good palliative care can ensure people have a good death. That’s my point.

“I’m not saying that you should consciously, as a medical professional, set about a path that leads to someone’s death. What I’m saying is that there are ways that a medical professional can legitimately respect the wishes of a patient and that the way that those legitimate care options manifest themselves can be in different timeframes.”