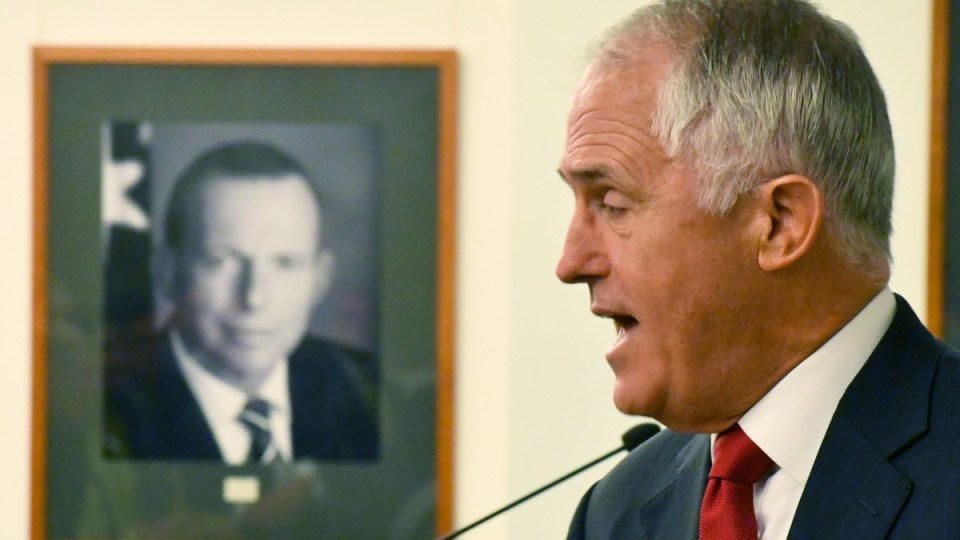 Malcolm Turnbull was haunted by Tony Abbott and the poor poll numbers he cited as a rationale for ousting Mr Abbott as PM. Photo: AAP

Immigration Minister Peter Dutton has walked back comments widely seen as signalling that he is willing and available to replace Prime Minister Malcolm Turnbull, whose standing in the polls continues to go from bad to worse.

Appearing on Sunday morning with Sky News host Peter Van Onselen, Mr Dutton seemed to go out of his way to express faith in his party’s leader, who has presided over what are now 10 losing Newspolls in a row.

The latest numbers, released on April 3, show Labor holding a landslide advantage, leading the government 53-47 on a two-party preferred basis.

Support for the PM among older Australians is also on the decline as the popularity of Pauline Hanson’s One Nation grows, new polling shows.

Analysis of Newspolls between February and April for The Australian showed the coalition holding 40 per cent primary vote support among the 50-plus age group – down from almost 50 per cent last July.

One Nation’s strongest gains come from the 50-plus age bracket, climbing from 1.8 per cent primary support at last year’s election to 11 per cent, the figures published on Monday show.

Last week, when asked if Mr Turnbull should be held to the same standard he cited against Tony Abbott, who had lagged in 30 Newspolls at the time of the coup, Mr Dutton said Mr Turnbull had no choice but to “acknowledge” the polls’ downward slide was raising doubts about his own leadership.

With Mr Van Onselen, however, he expressed nothing but confidence in Mr Turnbull, citing John Howard’s come-from-behind victory in 2001, when he said the Liberals were “gone for all the money”.

“We have the ability to turn the polls around … under Malcolm Turnbull,” he said.

“This government can win the next election and win it well.”

Nevertheless, Mr Turnbull’s move two years ago to invoke polling numbers as a rationale for moving against Mr Abbott continues to haunt him.

Asked on Melbourne’s 3AW radio last week by host Neil Mitchell if he would follow his own example and step down from the leadership, Mr Turnbull insisted polls were irrelevant with the next election still more than two years away.

“No such metric applies,” he said.

The Prime Minister insisted that citing the 2015 polls against his then-leader was just “a reference”, adding they weren’t “the only basis for my mounting a challenge, I made a number of other points”.

Mr Dutton’s latest comments were in marked contrast to those of just a few days earlier, when he did not mince words in agreeing it was inevitable that Mr Turnbull would be judged by his own standards.

“Malcolm Turnbull wouldn’t step back from that point,” Mr Dutton said when asked if his leader remained secure in his job.

“What we need to do is to turn polls around if that’s the measure we have to make tough decisions as the Howard government did, as the Abbott government did.”

That urgency to reverse the government’s ongoing loss of voter support only grew more intense over the weekend, when the NSW Liberal Premier Gladys Berejiklian saw by-election swings of as much as 25 per cent against her government.