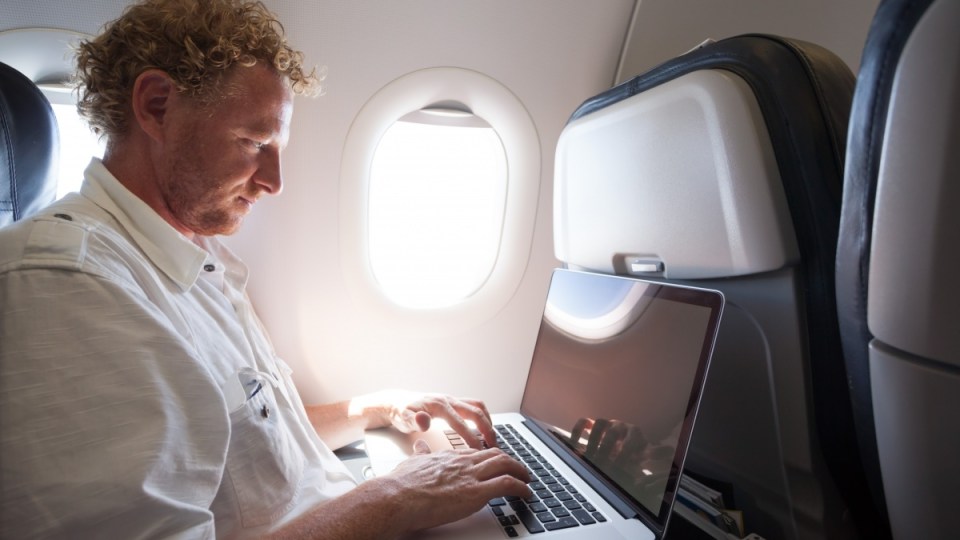 The US electronics ban on some flights has prompted several airlines to provide their own devices for passengers. Photo: Getty

The day may not be that far off when all passengers flying out of Australia will be provided with onboard laptops and iPads, while being prevented from using their own devices.

Acting on high-level intelligence reports that Islamic State and al-Qaeda are working to conceal plastic explosives inside laptop battery compartments in order to smuggle them past airport scanners, Donald Trump’s administration has banned travellers flying out of 10 airports in eight Middle East and African countries from taking large electronic devices into the cabin.

The UK has taken similar action for six countries.

Australia has also announced additional security measures for travellers passing through the Middle East, to take effect from Thursday.

Gulf airlines are already working around the bans by providing high-end business travellers with onboard laptops.

The bans come against a backdrop of moves by the Trump administration to block immigration from a number of predominately Islamic nations currently wracked by civil wars, domestic chaos and known as hotbeds of Islamic extremism.

An equally charged dispute between Gulf and American airlines over unfair competition and loss of American jobs has also raised questions of a commercial motivation.

“In response to national security advice the federal government has made precautionary changes and instructed airlines to implement new protocols,” he said. “Explosive detection screening will be conducted for randomly selected passengers and their baggage.”

The International Air Transport Association has issued an urgent call for governments to resolve the conflict, saying the commercial distortions were severe.

Director General Alexandre de Juniac said: “The current measures are not an acceptable long-term solution. Even in the short term it is difficult to understand their effectiveness. Why don’t the US and the UK have a common list of airports? How can laptops be secure in the cabin on some flights and not others, including flights departing from the same airport?”

Steve Creedy, an editor at Airline Ratings, told The New Daily that in practical terms the bans could lead to longer waits for flights transiting through Dubai, Abu Dhabi and Doha.

Devices with no electrical charge were particularly suspicious, so travellers will need to ensure there is some charge on their laptops, iPads and mobiles. Swabs of laptops may be taken to detect explosive material.

“It is essentially an additional layer of security,” he said. “The Department of Homeland Security have denied it, but there is a lot of commentary that this is another move by President Trump on migration. As well, there is suspicion it relates to the commercial battle between the US airlines and the Gulf airlines.”

Head of Border Security for the Australian Strategic Policy Institute, John Coyne, told The New Daily authorities in the US, the UK and Australia would not be implementing the restrictions without reliable intelligence.

“Terrorists are looking at new ways of blowing up planes,” he said. “It is a natural progression.”

Editor at Aviation Australia Tom Ballantyne told The New Daily for the airlines the bans were a “pain in the neck”.

“The security rules are all over the place, different in the UK, the US, Europe and Asia. The airlines want standardisation.”

He said airlines would have to adjust to providing onboard laptops for passengers transiting via the Middle East to London or the US because they could not access their luggage on stopovers.

“High-end business travellers are paying a lot to travel at the front of the plane. They expect to be able to conduct business while flying. The Gulf airlines are simply handing out laptops to travellers who need them. We could see that introduced into Australia.”