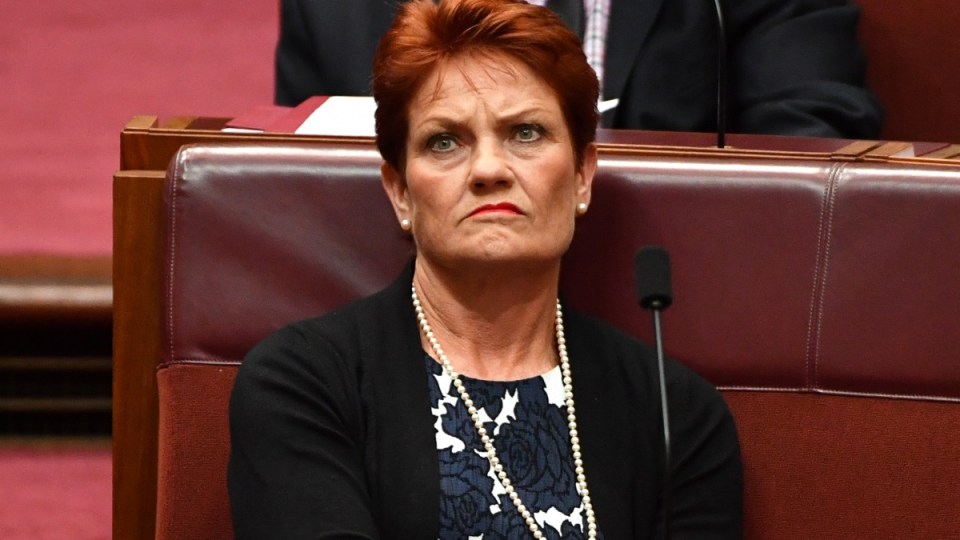 The London deaths were seemingly a political opportunity for One Nation's leader. Photo: AAP

Pauline Hanson’s One Nation party has been accused of intimidating and financially pressuring its own candidates and senior staffers.

Party insiders, candidates and long-term One Nation loyalists told the ABC’s Four Corners they had been used and discarded by Senator Hanson. They were the losers of a bitter internal power struggle now engulfing the party.

A string of former One Nation members also said they felt intimidated by Senator Hanson’s powerful chief of staff James Ashby, and that bizarre levels of control were used on candidates once they were inside the One Nation tent.

They said they were often issued directives from head office, banning them from speaking to party dissidents and the media.

Four Corners has also been told Mr Ashby keeps “dirt files” on politicians and people as a way of intimidating and silencing them.

When Four Corners filmed Pauline Hanson on the 2016 campaign trail during an all-media event inside a shopping centre, Mr Ashby repeatedly attempted to stop the crew from filming the One Nation leader.

Mr Ashby could be heard asking: “Don’t you care about what she’s asked?”

Four Corners was the only outlet to be singled out and asked to stop recording and leave. Other media outlets were allowed to record unhindered.

Other information obtained by Four Corners about the internal operations of the party raise serious questions about financial affairs and record keeping.

Before the March Western Australian state election, a string of candidates quit One Nation or were disendorsed by the party.

Several of them have spoken to Four Corners about the high cost of standing for One Nation.

All candidates had to sign it before they would be officially accepted by One Nation as a candidate.

The contract includes a financial penalty described as an “administration fee” of $250,000 payable to One Nation if any elected candidate quits the party.

Mr Sorensen said he refused to sign the agreement, writing letters of complaint to the party’s head office.

“It doesn’t bear any relationship to the costs of you being elected, it’s a punitive measure designed purely to intimidate and frighten people,” he said.

The candidate agreement also required candidates to pay upfront fees as well as a quarterly donation if elected, and imposed a 75 per cent cap on the amount of expenses they would be reimbursed from the party, with One Nation keeping the other 25 per cent.

Mr Sorensen also said he complained about the shambolic way party officials were running the election campaign and One Nation’s surprise preference deal with the Liberal Party.

“If the public knew what went on in the party I don’t think they’d have anything to do with One Nation,” he said.

“They’re just another grubby, dirty, bloody political party that are out to serve their own ends, their own interests.”

He was eventually disendorsed by Senator Hanson by letter, for refusing to comply with party policy and for being “belligerent and abusive”.

‘Hanson promised us: no preference deal with anyone’

One Nation’s preference deal with the Liberal Party in Western Australia, announced in the media in February before candidates were told about it, was a lightning rod for growing dissatisfaction within the party.

The party’s candidate for the Perth seat of Thornlie Sandy Baraiolo told Four Corners Senator Hanson had told her and other candidates at a meeting in January 2017 that there would be no preference deal with anyone, including the Liberal Party.

She said, when she took to her Facebook page to complain about the preference deal after news of it broke in the media, she was disendorsed by Senator Hanson and Mr Ashby over the phone.

“You can’t trust Pauline Hanson … She’ll sell you one thing and she’ll do something completely different,” Ms Baraiolo said.

One Nation’s highest-profile candidate, justice campaigner Margaret Dodd, also quit the party in the wake of the preference deal.

She said the party was chaotic and wasteful, with vast amounts of invalid printed election material sent to candidates.

“It is not what I thought it was. I thought Pauline was this ordinary person, fighting for the battlers,” Ms Dodd said.

“It’s about power for Pauline.”

While candidates have been sacked from the party for not paying money and for criticising the preference deal, other candidates have remained endorsed by Senator Hanson despite publicly calling for the return of apartheid, promoting white supremacy, making offensive and disparaging remarks about various groups.

The offensive comments posted by various One Nation candidates on social media included degrading single mothers as “too lazy to attract and hold a mate” and saying the gay community uses mind control to make the community support same-sex marriage.

Senator Roberts also told Four Corners One Nation was not afraid to offend.

“We bring a fearlessness, we don’t care what people think. We just speak the facts,” he said.

Senator Hanson and Mr Ashby did not respond to the ABC’s questions.