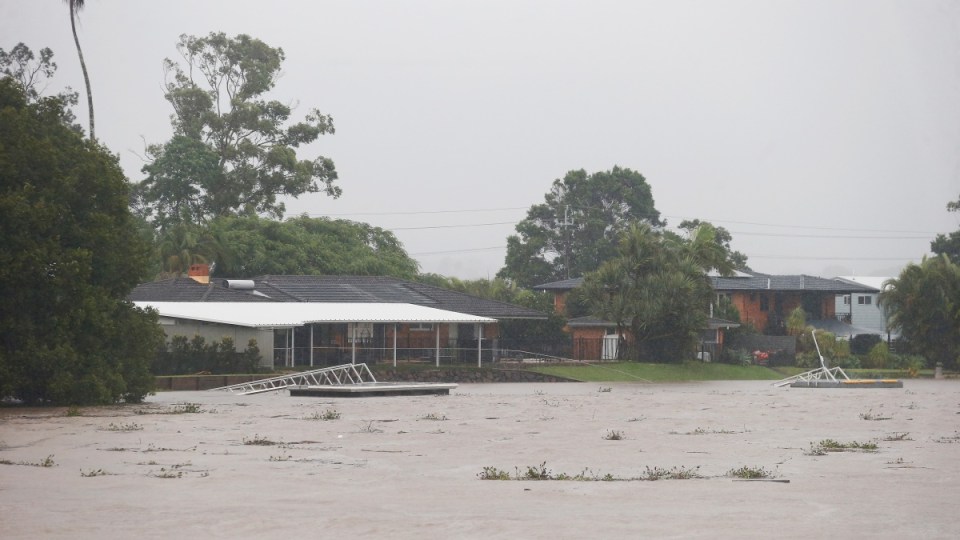 The bodies of a mother and her two children have been recovered from flood waters as police continue to work to recover their car that was swept into a northern NSW river.

The woman’s eight-year-old daughter miraculously escaped the car as it was washed into the cold, murky water on Monday afternoon.

Divers from Sydney arrived mid-morning on Tuesday in the tiny flood-hit town of Tumbulgum on the NSW-Queensland border to begin the recovery operation.

The 43-year-old woman, her seven-year-old son and 11-year-old daughter drowned after the family car veered off muddy Dulguigan Road in Tumbulgum into the Tweed River.

The family is reportedly from nearby Bilambil and media have named them as Stephanie King, son Jacob and daughter Ella-Jane.

“She was screaming (that) her mum, little sister and older brother had gone into the river in the car,” he told the Seven Network on Monday.

Another young witness, Sophie Grinham, said she saw the girl’s father respond to the pleas.

“The husband came down, and dad and two other boys just jumped into the water and couldn’t dive deep enough,” she told Seven.

The child was taken to Tweed Heads Hospital for bruises and cuts and was being cared for by family members.

Authorities using a boat equipped with sonar equipment found the missing car five metres from the river bank around 3.25pm on Monday.

The search operation will resume on Tuesday morning with police divers travelling up from Sydney.

There have been three confirmed deaths from the northern NSW floods.

Two women, 36 and 64, were swept away by floodwaters, and a 46-year-old man died in Murwillumbah from a heart attack when paramedics could not reach him.

A 45-year-old man was also discovered dead at South Murwillumbah caravan park, although his cause of death is still unconfirmed.

Rockhampton residents received good news on Monday, with authorities now saying the expected flood will not be as bad as previously thought.

But Queensland Premier Annastacia Palaszczuk has warned locals they “are not out of the woods yet”.

The Bureau of Meteorology said on Monday morning the latest forecast was for a flood peak of nine metres on Wednesday, just under the 2011 flood level.

Authorities had warned over the weekend that the Fitzroy River could peak at 9.4 metres on Wednesday or Thursday, making it the worst flood in more than 60 years.

At that level, Rockhampton Regional Council warned 5400 properties would be under threat, including 3000 homes.

But a major flood warning still exists for the Fitzroy, with extra emergency crews sent to the town for flood preparations.

Floodwaters have barely receded in the northern NSW town of Lismore but more than a dozen looters have already been caught trying to take advantage of the devastated community.

Police say one man was arrested for theft and intimidation, while 16 other people were moved on from Lismore CBD in the past 24 hours.

“The residents of Lismore have suffered loss of life, loss of property and emotional turmoil from the recent flood events across northern NSW,” a NSW police statement read.

“Haven’t they suffered enough without individuals stealing what items they have left.”

Queensland Health has warned that popular creeks and rivers have been contaminated with sewage overflow, or “floaties”, in the aftermath of ex-tropical cyclone Debbie.

The illnesses include gastroenteritis, dermatitis and other severe infections.

“If you’re thinking about boating, fishing or rowing, particularly in the Brisbane and Logan rivers, please wait at least a week after floodwaters have receded.”