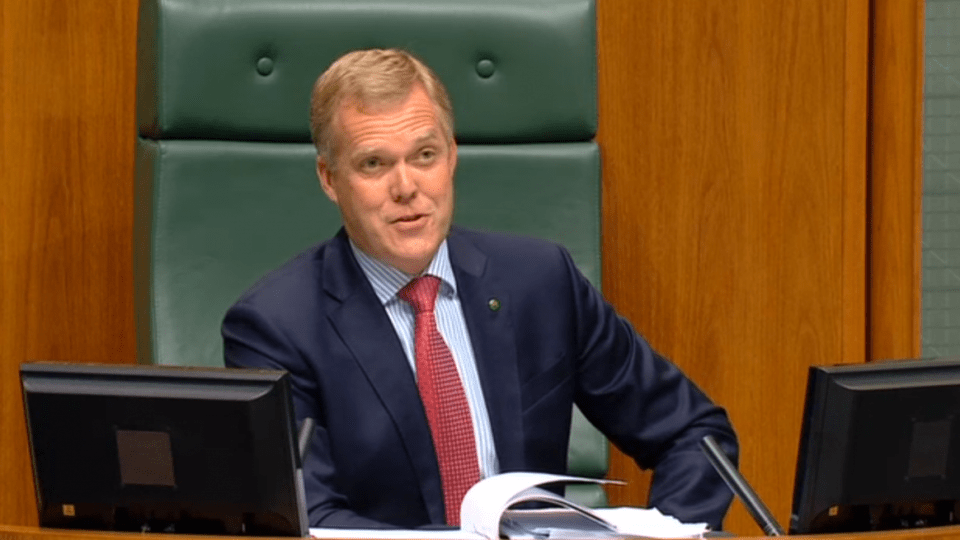 Speaker Tony Smith was stern in his rebuke of Independent MP Andrew Wilkie.

Crossbench MPs have used Question Time to ramp up their efforts for a banking commission, bypassing the government in an unusual parliamentary stunt.

Politicians’ questions are usually directed to the Prime Minister or other ministers, but on Tuesday Indi MP Cathy McGowan chose instead to ask Tasmanian independent Andrew Wilkie about his bill for a banking code of conduct.

Mr Wilkie was told by Speaker Tony Smith that the rules meant he could only discuss the parliamentary processes relating to his bill, rather than argue for it.

He used his time to call on Parliament to bring the bill – which would legislate for a mandatory banking code of conduct – to a vote.

The crossbenchers are also pushing for a banking commission of inquiry, and believe they could deliver a blow to the government by passing a bill for one in the lower house.

But Mr Wilkie soon began making the case for a code of conduct itself, drawing a rebuke from the government and – eventually – the Speaker.

“He has rapidly gone off the road now, he needs to confine himself to the timing and procedure,” Mr Smith told the Parliament.

He gave Mr Wilkie the chance to continue, but after thanking Mr Smith for his “guidance”, the Denison MP was stopped in his tracks once again.

“Can I say to the member for Denison, I don’t want to be headmasterly here, but it’s not guidance, it’s a ruling,” Mr Smith said.

“This is not a negotiation. So get the car back on the road or we’re going to move.”

Mr Wilkie introduced a bill for a banking code of conduct into Parliament on Monday.

The bill would legislate for a mandatory set of guidelines for the banks to follow, and they could then be fined and “named and shamed” for breaking these rules.

It is one of three crossbench proposals to rein in the banks, with two bills for a commission of inquiry into the sector also now before the Parliament.

With the support of Labor and Nationals MP George Christensen confirming he will cross the floor to support a banking inquiry, the crossbench MPs are calling for a vote on the matter in the lower house.

Greens Senator Peter Whish-Wilson, who has co-signed a bill with One Nation, Nick Xenophon, Derryn Hinch and Jacqui Lambie, has previously told The New Daily a banking commission of inquiry was “only one scandal away”.