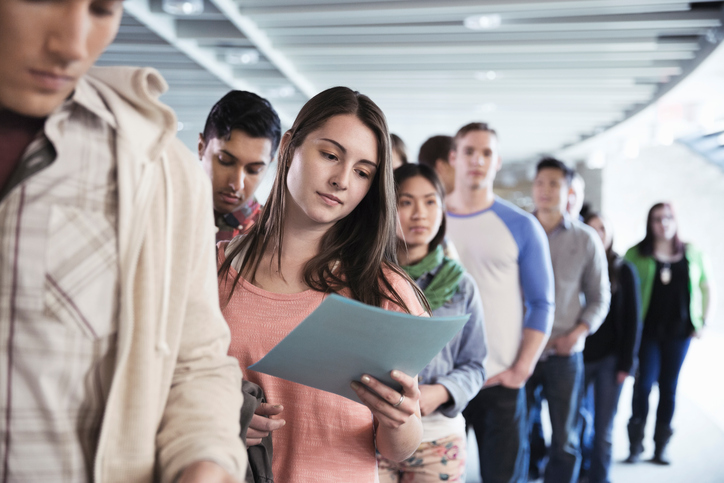 Brotherhood of St Laurence is warning about youth underemployment across the nation. Photo: Getty

The Turnbull government has been accused of waging a “war on young people” on the same day new figures show youth underemployment has hit its highest point in four decades.

Crossbench MPs Rebekha Sharkie, Cathy McGowan and Skye Kakoschke-Moore on Monday called for the return of the Youth portfolio, which was scrapped by former prime minister Tony Abbott in 2013.

It came as a Brotherhood of St Laurence report showed underemployment among Australians between the ages of 15 and 24 had reached 18 per cent, higher than during the GFC and Australia’s last recession in the early 1990s.

Ms Sharkie, a Nick Xenophon Team MP, said the lack of a youth minister and the rise in underemployment went “hand in hand in many ways”.

“It fails all of us because if we don’t get this next young generation into full employment, they won’t ever afford to own a home, they’ll be pushing out the years that they might have to start a family and they won’t be contributing tax,” Ms Sharkie told The New Daily.

The youth ministry was introduced by Malcolm Fraser in 1978 and remained in government until it was dismantled by Mr Abbott. Labor has also since removed the post from its shadow ministry.

Ms Sharkie said a youth minister should sit in cabinet, as in Canada where Prime Minister Justin Trudeau is also responsible for youth affairs.

“Not having a youth minister tells young people that unlike those who live in northern Australia, or unlike ageing, or unlike rural health or a whole lot of other important issues, this government doesn’t believe they deserve a voice,” she said.

“For the nuts and bolts of government, it also means that the issues that young people experience, such as transitioning from education to employment, are not being addressed around the table. That’s why we’ve had really poor budgets in relation to young people over the past three years.”

Tough proposals to change welfare payments for young people, the scrapped university deregulation plan as well as the current jobs figures were part of a “war against young people”, Ms Sharkie said.

Last month, an estimated 282,000 young people were unemployed and 377,000 were in work but needed more hours, the Brotherhood of St Laurence report said.

“In the past 15 years the average gap has widened between the actual working hours of young underemployed people and the hours they would like to work,” the report said.

The youth underutilisation rate – which combined the jobless and those who are employed but want more work – now sits at 31.5 per cent, compared to about 27 per cent during the GFC in August 2009.

Young people were also far more likely to be in casual and part-time jobs than they were at the beginning of the 2000s, the report said.

Ms Farouque said policymakers needed to focus on the number of young people who weren’t getting enough hours at work as well as those who were unemployed.

“If you’re getting much fewer hours than you’d like, how can you build a good life?” she said.

She said the government’s PaTH program, would “see up to 120,000 young Australians job ready and into gainful employment”, while other programs were in place to help get vulnerable young Australians into the workforce.