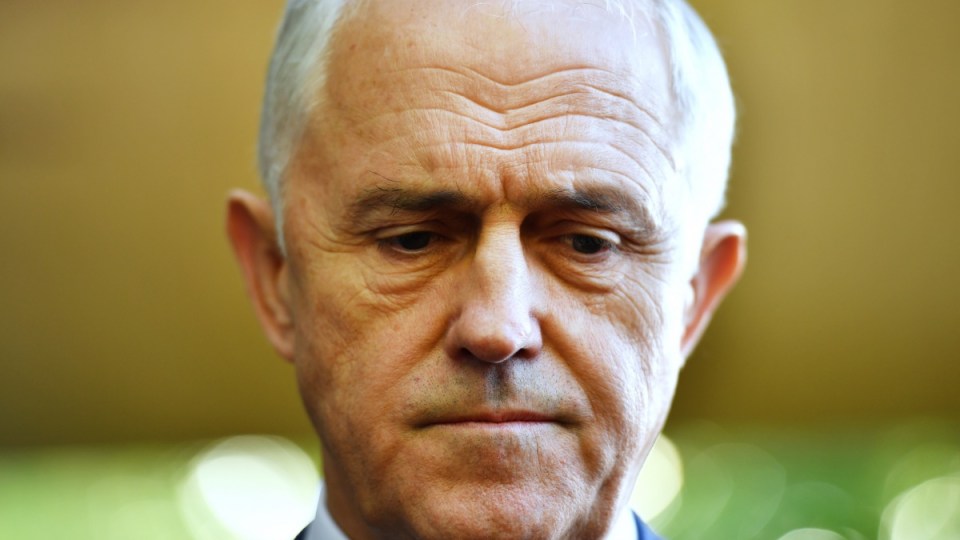 Malcolm Turnbull and his government have dropped significantly in the latest poll. Photo: AAP

The Turnbull government has dropped a staggering 10 points behind the Labor Party in the two-party preferred vote, a newly-released poll suggests.

According to the Fairfax-Ipsos poll, the Coalition trails Labor 55 per cent to 45 per cent in its biggest slip since the July 2016 election.

It also comes less than a week after The Australian Newspoll  suggested a Coalition fightback, with the Coalition gaining three points to 48 per cent in the two-party preferred race.

Talk of a Coalition leadership spill was also mooted over the weekend, prompting a denial from Deputy Liberal leader Julie Bishop.

The Ipsos poll, which sampled 1400 voters from Thursday night to Saturday evening last week, suggests the Coalition’s preference in the two-party vote has fallen further behind Labor since the November figures of 51 per cent to 49 per cent.

It’s a worse standing than that recorded in August 2015 (54-46), when Tony Abbott was removed as leader by Mr Turnbull.

Fairfax reports that under a uniform swing, if an election had been held on Saturday, the government would have suffered an “electoral drubbing and lost 24 seats, including cabinet ministers Peter Dutton and Christian Porter, as well as junior ministers Ken Wyatt and Luke Hartsuyker”.

It also found almost two-thirds, or 63 per cent, of voters surveyed do not believe the Coalition’s argument that the Fair Work Commission’s decision to cut penalty rates will mean more businesses will choose to open on Sundays or public holidays.

Only 29 per cent buy the Coalition’s stance.

Mr Turnbull’s personal approval slid considerably since November polling, dropping five points to 40 per cent ahead of the final sitting of Parliament before the May budget.

His disapproval rating rose by three points to 48 per cent.

Another contentious issue swaying the polls was whether investor tax breaks on negative gearing and the 50 per cent capital gains tax concession should be curbed before the budget.

It found 35 per cent of voters believe the concessions should be pared back, while 40 per cent believe they should be left as they are.

Only 19 per cent of people said concessions should be made more generous.

The poll also found voters were divided when it came to the Coalition’s agenda to cut the company tax rate from 30 per cent to 25 per cent over the next 10 years.

While Labor is strongly against the tax cuts, 44 per cent of voters agreed with the government’s plan, compared to 39 per cent against it.

According to last week’s Newspoll, Mr Turnbull’s position as a preferred prime minister had also risen three points to 43 per cent, while Mr Shorten lost ground, falling to 29 per cent.

Despite this, Ms Bishop on Sunday shrugged off suggestions the government could again change its leader.

“He’s got a vision for this country, he’s got a lot of issues to deal with but he’s performing strongly and he will retain the support of the vast majority of the party room in order to lead us to the next election.”