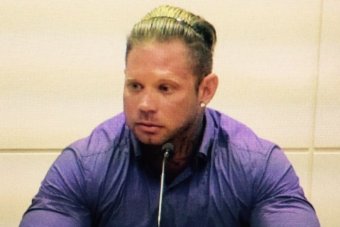 A former Don Dale guard has admitted he filmed himself bursting into a cell and repeatedly asking the boys in their beds to give him oral sex.

Conan Zamolo was a youth justice officer at Don Dale and is giving evidence to the Royal Commission into the Protection and Detention of Children in the Northern Territory.

Explicit videos filmed by Mr Zamolo were tendered as evidence showing the former guard’s behaviour towards the children.

WARNING: this story contains language and information that may distress some readers.

Under cross-examination by senior counsel assisting, Peter Callaghan SC, Mr Zamolo said the video in which he was heard demanding oral sex was “a joke”.

Mr Zamolo is heard laughing in the recording and saying: “Who wants to suck my d***? Which one of you boys wanna suck my d***?”

One of the boys is seen hiding under his sheet while Mr Zamolo shouted: “Come suck my dick you little c***.”

Mr Callaghan asked Mr Zamolo: “Did it occur to you that any of the boys might not have found it funny at all, but might have felt compelled to go along with it?”

Mr Zamolo replied: “I had a good relationship with the kids, that’s how they talk to each other … I wouldn’t have done it if I thought that they would’ve been offended by it, obviously I knew them quite well.”

Commissioner Margaret White asked Mr Zamolo whether he had woken the boys up in order to joke around with them.

“No, no, I was actually just going to say goodnight to them because I was leaving shift which I would do quite often,” he said.

Another video showed a boy being encouraged to eat a small pellet of something found on a table, agreed to be “something disgusting”.

Mr Zamolo said it was his voice heard on the recording.

He said the incident was common to the culture within Don Dale, and children would “goof around” as a way to pass time.

Mr Callaghan said: “Mr Zamolo, what was it about Don Dale that made you think it was OK to let this happen?”

Mr Zamolo replied: “I don’t know, it was just goofing around and that kind of thing happened a lot – they’d look for things to do to pass the time.”

Mr Zamolo’s evidence was that about six other guards were present at the time of that incident.

Mr Callaghan: “Mr Zamolo, if a child was doing something like that in a school ground at lunch time, you would expect the teacher on duty to intervene wouldn’t you?”

Mr Callaghan: “There’s a difference between goofing around, and doing something as clearly inappropriate as was seen here, isn’t there?”

Mr Zamolo: “Yeah, there is, but at the time it was just seen as goofing around. I can see now that it was inappropriate.”

A video that Mr Zamolo said he recorded on a smart watch showed himself bursting in on a urinal being used by an inmate.

The video was edited in the version shown to the royal commission, but Mr Zamolo agreed he had recorded the child urinating.

The screen goes black but Mr Zamolo is heard saying: “Oi, what are you doing you little gay dog?”

Mr Callaghan questioned whether there was “anywhere else on planet” Mr Zamolo would film a child urinating, besides at Don Dale.

Mr Zamolo replied “no”, but said he had only gone into the urinal because the child had been “taking too long” and he was testing his new watch.

“It was a new watch that I was playing with, that I’d been playing with all day … I can’t even tell you if I knew it was recording or not, I got no idea, I didn’t even know it was on my phone.”