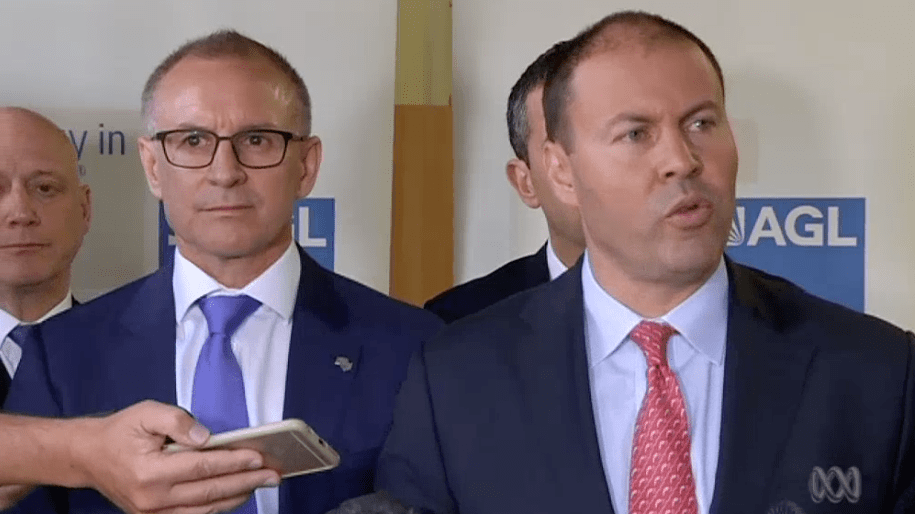 A political fight over energy policy led to a now infamous bust up between Jay Weatherill and Josh Frydenberg. Photo: ABC

In a dramatic escalation of federal-state tensions, Mr Weatherill and Mr Frydenberg traded insults on the sources of South Australia’s energy problems.

The event was called to promote energy company AGL’s trial of battery technology in Adelaide’s suburbs, but Mr Weatherill quickly made it all about ‘us versus them’ – a favourite theme of the premier who previously used it to his political advantage before the 2014 state election.

In one of his angriest public displays in recent memory, Mr Weatherill slammed the federal government, with a stony-faced Mr Frydenberg at his shoulder, and a sometimes smirking state Energy Minister Tom Koutsantonis in the background.

He hijacked the event in a fashion which both promoted his $550 million energy plan announced this week and accelerated the disintegration of the relationship between the state and federal governments on energy policy.

Mr Frydenberg and Mr Weatherill both claimed to be surprised to see each other at the event, which turned away from the issue at hand to an out-and-out verbal stoush.

“To be honest, I didn’t even know Jay was going to be here,” Mr Frydenberg said.

For nearly 20 minutes the pair stood side-by-side sledging each other, watched on by Mr Koutsantonis and smiling AGL boss Andy Vesey.

“I feel that the premier trying to come into this to crash tackle us at this announcement where he hasn’t put any money into this important initiative, which the commonwealth and AGL have, just shows you, unfortunately, how desperate he is,” Mr Frydenberg said.

The minister also talked up Prime Minister Malcolm Turnbull’s announcement for a $2 billion expansion of the Snowy Hydro scheme, denying it was made today to embarrass the state government.

Mr Weatherill labelled the announcement evidence of “white knuckled panic” from the Commonwealth over energy policy.

“I have to say it is a little galling to be standing here next to a man who has been standing up with his prime minister bagging SA at every step of the way over the last six months,” he said.

“It is a disgrace the way in which your government has treated our state. It’s the most anti-South Australian government we have seen from a Commonwealth government in living memory.”

South Australia can’t wait for a Snowy Hydro expansion four to seven years down the track, he argued.

“We have a plan to make SA self-sufficient, to stand on our own two feet today and that is what we’re getting on with.”

But Mr Frydenberg bristled and hit back.

“The premier made a $550 million admission of failure a couple of days ago,” he said, awkwardly refusing to make eye contact with the man he was talking about.