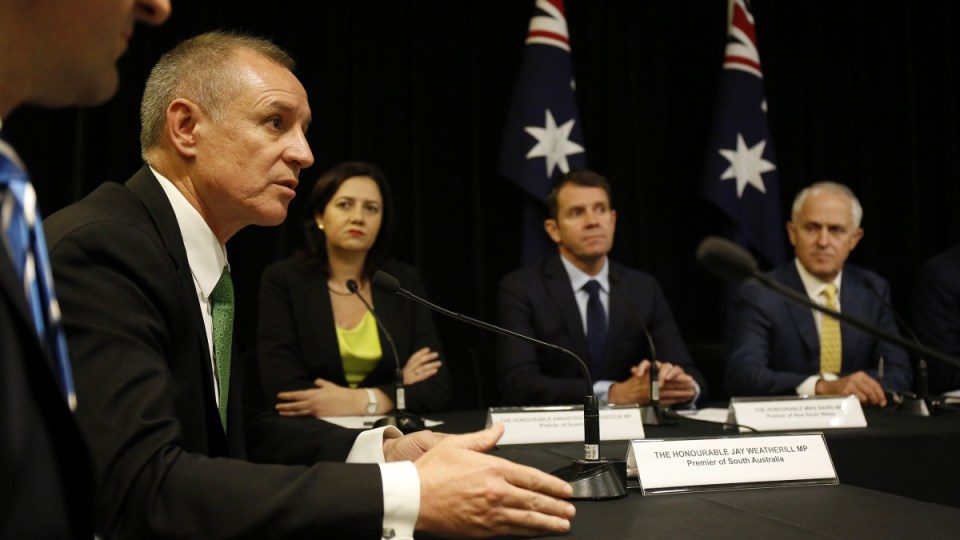 Federal and state goverments have been at loggerheads over energy policy. Photo: AAP

A long-simmering feud between the federal and South Australian governments descended into open warfare on Thursday as the nation’s leaders scramble to address a looming energy crisis.

“It is a disgrace the way in which your government has treated our state,” the Premier told Mr Frydenberg, claiming Canberra was in a “white-knuckled panic” on energy policy.

“It’s the most anti-South Australian government we have seen from a Commonwealth government in living memory.”

The two governments have been sniping at each other since South Australia suffered a major power blackout last year, which the Commonwealth blamed on the state’s reliance on renewable energy.

This week, Mr Weatherill moved to address those concerns by announcing a $500 million plan to make South Australia energy “self sufficient” by building a gas-powered power station and boosting battery storage.

On Thursday, the federal government made its own moves, with the Prime Minister announcing plans to double the power generation of the Snowy Hydro scheme through new tunnels and power stations.

He said it could be ready in four years’ time and used the announcement to question Mr Weatherill’s plan to go it alone on energy policy.

“The battery that they’re talking about there would deliver 100 megawatts of power for one hour. Just one hour,” he told The Project.

“Now, this, what we’re talking about here in the Snowy, is 2000 megawatts of power for weeks.”

Despite the tough talk from Canberra, Thursday’s clash showed the federal government was limited in its ability to meet the energy crisis, according to one political analyst.

“The states have the capacity to address these policy issues by themselves,” Monash University’s Dr Zareh Ghazarian told The New Daily.

The federal government, he said, was hampered by the political climate including a lack of bipartisanship at the national level.

And with South Australia set to go to the polls in March next year, just after summer, the fraying relationship between Canberra and South Australia appears unlikely to mend itself any time soon.

Dr Ghazarian said Mr Weatherill’s broadside on Thursday was aimed at creating an “us and them” mentality between South Australia and Canberra.

Mr Weatherill’s attack on the Turnbull government came a day after a Galaxy poll showed his Labor government on track to lose to Steven Marshall’s Liberal opposition.

“There’s a feeling that Jay Weatherill would like to perpetuate, which is that the federal government could not help out when it was needed most,” he said.

The extraordinary press conference had been arranged to spruik energy company AGL’s trial of battery technology in Adelaide, in which the Turnbull government had contributed federal funds.

After accusing Mr Weatherill of gatecrashing the event, Mr Frydenberg continued the war of words on Thursday night.

“What we saw from the Premier today, unfortunately, was the hijacking of an important announcement about the Commonwealth’s contribution to battery storage in order for him to score some cheap political points,” he told ABC’s 7.30.

A spokesman for the Premier denied Mr Weatherill had gatecrashed the event or that his comments were inappropriate.

“We confirmed the Premier’s attendance with AGL last Friday,” he told The New Daily.

“I think if you listen to what the Premier said, he was calm and in control.”

‘Us and them’: Why Jay Weatherill has gone to war with the Turnbull government