The young woman who headed downstairs for her “paleo pear and banana bread” in a much-maligned Department of Finance recruitment video was wrongly blamed by her boss for suggesting the line herself.

The Department of Finance was roundly mocked for the cringeworthy video, which was released to promote its graduate program.

Real-life staff members act in the video, called ‘The Game Changers’, including junior staffer Claire whose awkward encounter with her colleagues became the target of the most ridicule from viewers.

“Hey guys, I’m just heading downstairs for my paleo pear and banana bread. Would you like to join me?” Claire says in the video.

The offer is a “little bit fancy” for one colleague, who “is actually off to an Aboriginal and Torres Strait Islander staff network meeting”. 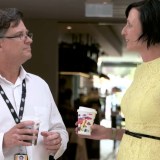 Is this the worst recruitment ad ever made?

After it went viral, Department of Finance staffers were quizzed about the video at a Senate committee meeting.

Liberal Senator James Paterson asked David Fredericks, a deputy secretary of the department, whether the line seemed “a bit trivial for a serious agency of government”.

Mr Fredericks responded that it had actually been added to the script by a graduate with “a bit of innovation”.

“That was a change made in the script at the time of the filming. It was actually made at the request of the graduate,” he said.

“It was basically accepted because we took the view, and I think the agency took the view, that we are possibly not the best people to know and understand how best to communicate to a young generation of graduates.

“So this graduate, with a bit of innovation, wanted to change the script.”

But the line was not added at Claire’s suggestion, according to Fairfax Media, which reported that Mr Fredericks has since written to the Senate committee to correct his evidence.

The Department of Finance has shelled out $37,400 with the ad agency Together Creative, government tenders show.