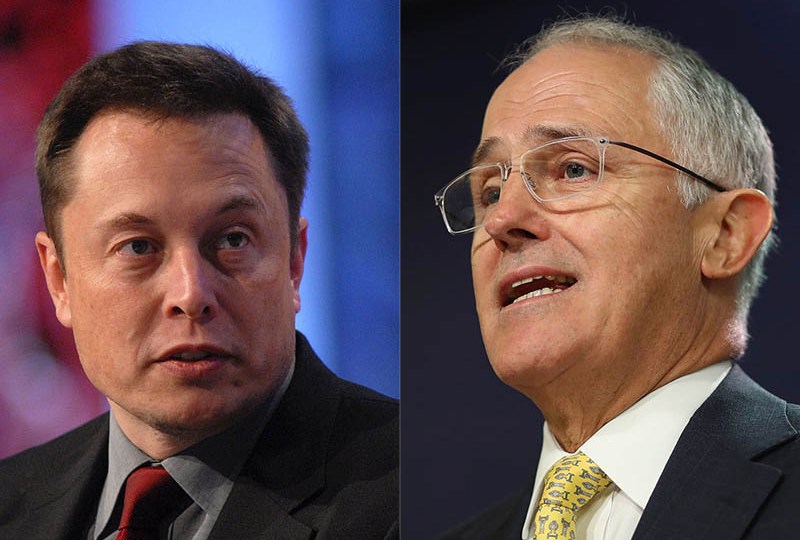 Malcolm Turnbull has had an “in-depth” discussion with tech entrepreneur Elon Musk about the future of electricity supply in Australia.

But it’s unclear if the Prime Minister asked the Tesla founder for more detail about his pledge to resolve South Australia’s energy crisis in the hour-long chat.

Mr Musk has promised to install the batteries needed to prevent ongoing blackouts in the state and have the situation fixed within 100 days or “it is free”.

Australian billionaire Mike Cannon-Brookes has vowed to help secure funding and political support if Tesla can supply the batteries.

Mr Musk has already spoken to SA Premier Jay Weatherill, praising the Labor leader for his commitment to a “smart, quick solution”.

It was followed by a phone call with Mr Turnbull on Sunday – a conversation both are understood to have been chasing for a while.

You're most welcome. Very exciting to discuss the future of electricity. Renewables + storage arguably biggest disruption since DC to AC. https://t.co/7uXoUQf29f

Labor’s federal energy spokesman Mark Butler said that Mr Musk’s proposal was still in its formative stage but he was excited about the prospect.

Some remote communities in Australia and beyond – in places like America Samoa – have already been able to use Tesla’s batteries to deal with the intermittency of solar and wind technology.

The biggest question was whether this sort of technology could operate within existing rules and outdated market structure, he said.

“(There’s) a bit of a way to go on this I think, but a really exciting exercise of leadership by the South Australian government,” Mr Butler told ABC TV on Sunday.

“Further discussions between (Mr Musk) and the South Australian premier should be encouraged.”

Greens Leader Richard Di Natale said the idea the transition to green renewable energy is a technological barrier is “nonsense”.

Noting Mr Turnbull is having an energy “crisis meeting” this week, Senator Di Natale said it just shows how governments have been asleep at the wheel.

“We are having crisis meetings about a crisis that has been unfolding for decades,” he said.