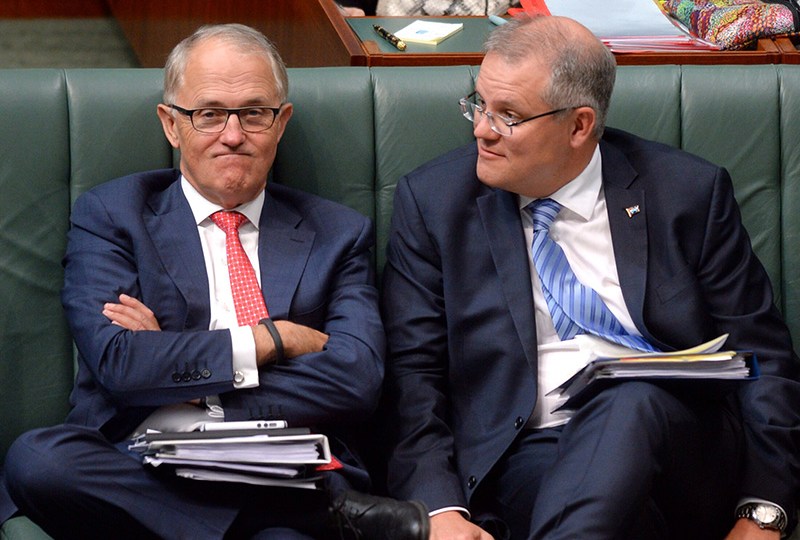 'The rest of the world is catching up to us' on border control, Treasurer Scott Morrison has said. Photo: AAP

Prime Minister Malcolm Turnbull has sought to downplay concerns about US President Donald Trump’s executive order to curb immigration, which has faced strong criticism from the United Kingdom and Germany.

More than 134 million people have been temporarily banned from the US as a result of Mr Trump’s sweeping executive order, which bans travel from seven Muslim-majority countries for 90 days.

But Mr Turnbull refused to comment on Mr Trump’s executive order, saying instead Australia’s immigration and border security policies were “the envy of the world”.

“It is not my job as Prime Minister of Australia to run a commentary on the domestic policies of other countries,” he said.

“We’ve got very strong systems — that is a fact. We’re proud of those and we’ll maintain them and where we can, we will enhance them.”

Mr Turnbull said the Department of Foreign Affairs and Trade (DFAT) had not received requests for consular assistance from Australians unable to enter the US.

The rest of the world is catching up to us and how the US wants to handle that is a matter for them.
Scott Morrison on 2GB radio

“They have had an election, and the president is implementing what he said he would do,” Mr Morrison said.

“I remember when we came [into office] in 2013 and I was implementing our border protection policy, people threw their hands up and I said, ‘look, I’m doing what I said I’d do and the way I said I’d do it’.”

Prime Minister Malcolm Turnbull would not condemn Mr Trump’s decision, despite being asked his opinion by reporters on Monday afternoon.

“It is not my job, as Prime Minister of Australia, to run a commentary on the domestic policies of other countries,” Mr Turnbull said. “So we have, here, in Australia, border security arrangements which are the envy of the world. And I know this from when I was at the UN in September.

“I can tell you, leader after leader spoke to me about how much they admired the security, the intelligence-based security systems, we have on our border to keep Australians safe. And to keep terrorists out of Australia.

“We’ve got very strong systems. That is a fact. And so, we’re proud of those and we’ll maintain them, and, where we can, we will enhance them.

“If others wish to emulate what we’re doing, they’re welcome to do so. But I am not about to run a commentary on other country’s practices.The executive order suspends all refugee admissions for 120 days with case-by-case exemptions and suspends entry of Syrian refugees indefinitely.”

For everything you need to know about Donald Trump’s immigration ban, click here

The order was partially stayed by an emergency court ruling, in response to a case filed by the American Civil Liberties Union on behalf of two Iraqi men who were interpreters for the US military.

Foreign minister Julie Bishop, who is in Los Angeles to promote Australian businesses, did not condemn Mr Trump’s move.

She said Australian diplomats were working closely with Mr Trump’s administration and US officials.

I’m confident that the Australian Government and the US Government will continue to support each other in ensuring that we can implement our strong immigration and border protection policies.”
Julie Bishop

Acting US Ambassador James Carouso said he did not know why Afghanistan and Pakistan had been left off the temporary ban list.

“I wish I knew, but these are the countries they chose,” he told Melbourne radio station 3AW.

He said no Australian officials had contacted him personally to discuss the executive order.

The Department of Foreign Affairs and Trade has updated its advice for Australians travelling to the US, warning of the changes.

“Any of these Australians who have previously been issued an Electronic System for Travel Authorisation [ESTA] are likely to have the ESTA revoked,” the statement said.

It said exemptions would be made for Australians who have travelled on official Australian Defence Force or Government business.

“No exceptions will be made for government officials or ADF members who are dual citizens of Iran, Iraq, Syria or Sudan,” the statement said.

Labor’s Tanya Plibersek said the Government was “missing in action” and needed to provide Australian travellers with clarity.

“I think it’s absolutely vital now that the Australian Government seek clarification about how this will affect Australian citizens,” she said.

“We’ve seen UK Prime Minister Theresa May make it clear that she does not support this travel ban.

“I think it would be very important for the Australian Government to make a clear statement about its view on this discriminatory travel ban.”

As the reality of President Trump’s executive order on immigration hits, immigrants and their relatives grow anxious about what it means for their loved ones.

Ms May has ordered two of her most senior ministers, Foreign Secretary Boris Johnson and Home Secretary Amber Rudd, to call their US counterparts in protest.

German Chancellor Angela Merkel, who has been criticised by Mr Trump for her immigration policies, has criticised the ban, saying the fight against terrorism was no excuse for banning refugees.

Labor backbencher Matt Keogh told ABC News he had heard concerns within his electorate, where last year a mosque was targeted by a firebomb and anti-Islam graffiti.

Mr Keogh said, while it was the United States’ right to determine its own policy, the executive order had created uncertainty in Australia.

He said the “complete lack of concrete information” had to be addressed.

Labor’s Sam Dastyari, who was born in Iran, said the executive order would prevent members of his family from travelling to the US.

Malcolm Turnbull had a phone call with Trump. If he didn't raise this; he is a coward. #muslimban pic.twitter.com/zCcULLA4EX

On Facebook, the NSW senator said his family felt targeted by the order, along with thousands of other Australians born in the seven nations.

“It’s hard not to feel like shit when you flee Iran, build a life in Australia, become a citizen, run small businesses that employ people and are now told that you now can’t even travel to the United States,” he said.

Australian counter-terrorism experts have raised concerns the executive order may undermine national security in the US.

Australian National University (ANU) Defence Studies Centre’s Professor John Blaxland said the order undermined the “soft power” of the US and may hurt efforts to “dampen the flames of Islamist extremism”.

It leaves gaping holes in a purported shield to protect Americans from terrorism. Indeed, this initiative likely will undermine rather than reinforce US security.”

“In terms of counter-terrorism, we cannot discount the influence this has on people feeling dislocated and marginalised,” he said.

“In terms of the countries he is blocking, it doesn’t really make any sense as it doesn’t include countries that have been heavily involved in terrorism.”