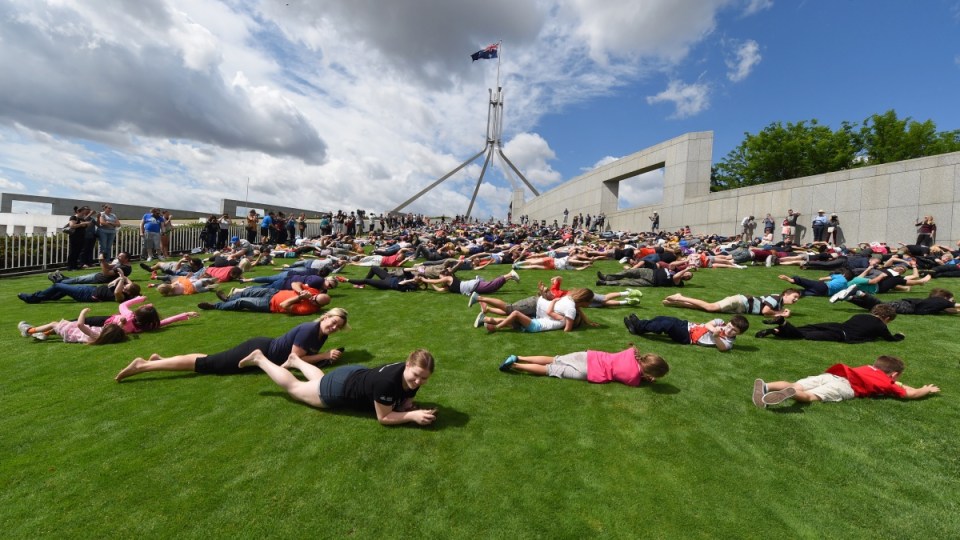 Hundreds gathered on the lawn at Parliament House in Canberra for one last roll earlier this year. Photo: AAP

It is about as peaceful and playful as a protest can be.

On Saturday morning, hundreds of people took what might be their last opportunity to roll down the lush lawns of Parliament House in Canberra.

Over the summer recess, it is expected the grassy area outside the nation’s seat of power will be fenced off due to security concerns.

That means the time-honoured tradition of lawn tumbling will be no more for visitors to Australia’s capital.

More than 300 people protesting against the plan, and the odd pooch or two, took to the rain-soaked lawns for one last dizzying dash down the hill.

Hundreds roll down the lawns of Parliament House – making the most of it before the fences go up. @abcnewsCanberra pic.twitter.com/n5xgn3MDwo

Canberran Lorraine Palmer said it was important her family took the chance while they could.

“The grandkids have got to go rolling down the hill, they won’t be able to do it after this weekend,” she said.

The lawn roll was organised on Facebook by local Lester Yao for a few of his friends, but the event soon blew out.

He said the day was more about fun than a protest.

“It’s good to see a bit of joy come back into the place. I think it’s a beautiful thing,” he said.

“Today is not about politics, its about a guy wanting to roll down a hill.

“It’s a really beautiful symbol of what our democracy is, to be able to say this is a freedom that we have.”

Despite the frivolity, the serious side of the mass roll was not lost on the crowd, with many venting their anger at the planned fencing.

“We’re one of the few countries in the world where through our national parliament we can actually walk on top of our politicians, be on top of them,” protester Edward Patching said.

“Today it seems we’re on our way to losing that. I think that’s unfortunate.”

Parliament House was deigned by Romaldo ‘Aldo’ Giurgola who died earlier this year.

It was designed to allow Australians the opportunity to physically and symbolically stand on top of the politicians at work.

“[Parliament House] could not be built on top of the hill as this would symbolise government imposed upon the people,” Giurgola said before his death.

“The building should nest with the hill, symbolically rise out of the Australian landscape, as true democracy rises from the state of things.”