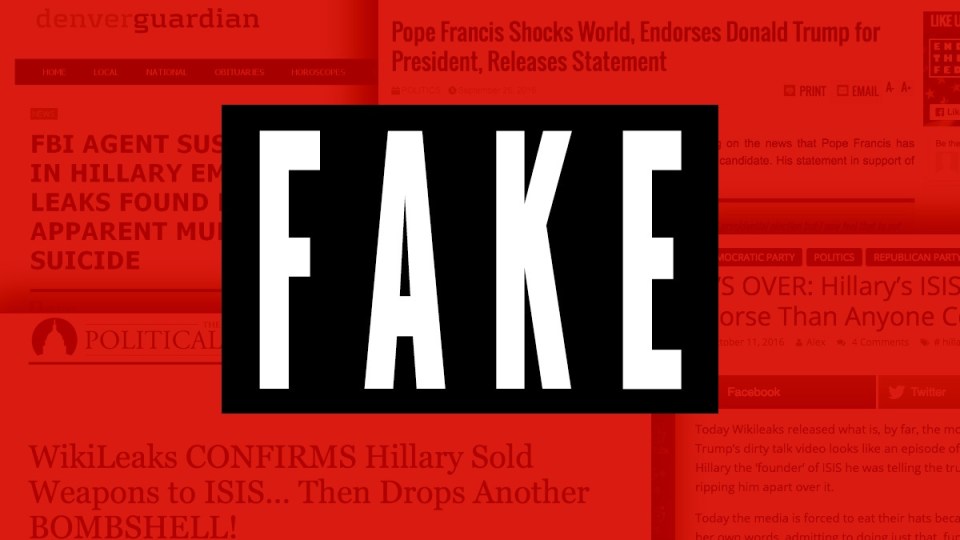 There's a medical reason why we're susceptible to fake news.

Outgoing US president Barack Obama has increased the pressure on Facebook to stem the tide of fake news.

During a press conference in Germany this week, President Obama blamed the social media website for contributing to widespread disinformation.

“[Today] there’s so much active misinformation and it’s packaged very well and it looks the same when you see it on a Facebook page or you turn on your television,” he said. As all mainstream media outlets now distribute text, video and audio journalism via Facebook, the phenomenon of fake news Facebook accounts has emerged as systemic distortion. It has led to research and analysis into what is being called a ‘post-truth’ world.

At times during the Trump/Clinton US presidential election campaign, a frenzy of disinformation posted on fake news sites eclipsed even the audience engagement of mainstream sites.

Some of these fake sites have devilishly clever, entertaining, satirical or anarchic content which, perhaps understandably, score more hits, likes and shares than mundane news.

But many are also defamatory, false, character assassinating or smearing, bigoted, xenophobic and vilifying. This falls into the category of dis-information: false information or propaganda tactically and deliberately put into the ether (now cyberspace) with the intention to mislead in a game of high stakes adversarial politics.

According to Pew Centre research, almost half of the American population now rely on social media, including Facebook, as the primary source of news.

The Washington Post has reported that one clever fake news creator, Paul Horner, 38, earned more money from Google AdSense revenues generated by his fake news work than as a professional news journalist. “Nobody fact checks anything any more,” a remorseful Horner said. “I mean that’s how Trump got elected. I think Trump’s in the White House because of me.”

BuzzFeed has reported that the Macedonian town of Veles has earned significant AdSense revenue through a hub of its citizens who have  created around 140 US politics websites with plausible sounding domain names like  WorldPoliticus.com, TrumpVision365.com, USConservativeToday.com and USADailyPolitics.co.

All aggressively posted pro-Trump content. The creators are motivated by money as Facebook reports that a United States Facebook user is worth four times more in ad revenue than can be earned from an offshore user.

President-elect Trump has said his social media dominance made all the difference to his success.

It has been reported that the Trump campaign spent $US56million on Facebook advertising compared to $US68million on TV. According to Bloomberg, Trump campaign director Stephen Bannon said there was a strategy to drive down voter participation with ant-Clinton memes.

While this might be true, there needs to be further research into what may have motivated voters to disengage and stay at home.

Facebook censors some questionable content on the basis of family values, while letting false reporting slip through.

The social media website prohibited the famous (naked) Napalm girl photo, an iconic news photograph which helped to change American perceptions about the war in Vietnam in the 1970s.

On Monday, Facebook took a minor step to address the issue by clarifying its advertising policy to emphasise it won’t display ads on sites that run information that is “illegal, misleading or deceptive, which contains fake news”. The company said it was merely making explicit a policy that was already implied.

In Australia the media regulator, the Australian Communications and Media Authority, is closely watching what is happening globally.

“The sacked team members were mostly New York journalists, and they were in fact replaced with other human overseers who were to check that the items the algorithms chose were linked to the real world — but not make editorial decisions — and who failed to realise the Kelly story was bogus.”

“As with the familiar phenomenon known as ‘confirmation bias’, both human and technological choices have the ability to reduce our access to a diverse set of opinions.”

Licensing broadcast media outlets and controlling print ownership to ensure competition in  audience reach and share in local and national markets appears to be obsolete regulation in the face of the global internet.

The ACMA is watching Facebook and Google closely but so far appear to have no idea about how to ensure that media strives accurately to inform a polity and does not wilfully mislead.