Two males accused of trying to fight for terrorist groups in Syria and Iraq have been charged after police swooped on the pair during raids in Sydney.

Mehmet Biber, 24, is alleged to have travelled to Syria to join the al-Qaeda affiliated group, Jabhat al-Nusra, in July 2013 before he returned to Australia a year later.

A 17-year-old boy, who’s believed to be an associate of Biber’s, is accused of trying to travel to Syria in January 2015 to join Islamic State.

The teenager, who cannot be named, was formally refused bail at Parramatta Children’s Court on Thursday afternoon after being charged with two terror-related offences.

The maximum penalty for the offences are life imprisonment.

Biber was meanwhile charged with one count of incursions into foreign states with the intention of engaging in hostile activities and was also formally refused bail at Parramatta Local Court. 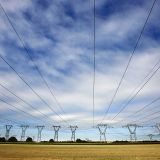 The pair were arrested during a string of counter-terrorism raids conducted by Australian Federal Police and NSW Police across Sydney’s south-west on Thursday morning.

There was no imminent threat to the community, police said.

Police allege Biber was recruited to fight in Syria by Hamdi Alqudsi, who was sentenced in the NSW Supreme Court in September for arranging for seven men to make their way to foreign battlefields.

Biber returned to Australia in February 2014 and was living in western Sydney with his wife and young daughter.

In January this year, he posted a message on social media warning there would be more attacks like the shooting murder of police accountant Curtis Cheng in 2015.

Ms Burn said the arrested teenager wanted to engage in hostile activities overseas but was stopped from leaving the country at Sydney Airport.

It’s also alleged he was actively encouraging another friend to join him.

Both males will stay behind bars before they’re due to appear at separate courts on December 15.

AFP Assistant Commissioner Neil Gaughan defended the length of time it had taken police to apprehend the pair.

“Evidence collection from Syria is extremely difficult based on the fact that there is no competent law enforcement officers working in the region,” he said.

It’s estimated around 110 Australians have been fighting in the Middle East, while close to 60 have been killed.

Ms Burn said she was concerned another Australian teenager appeared to be involved in terrorism activities, saying the issue needed to be dealt with by the whole community.

“We can’t do this alone, we have to work with everybody so that we can really eliminate what we are seeing happening with some of our young people who might be susceptible or vulnerable to radicalisation and violent extremism,” she said.