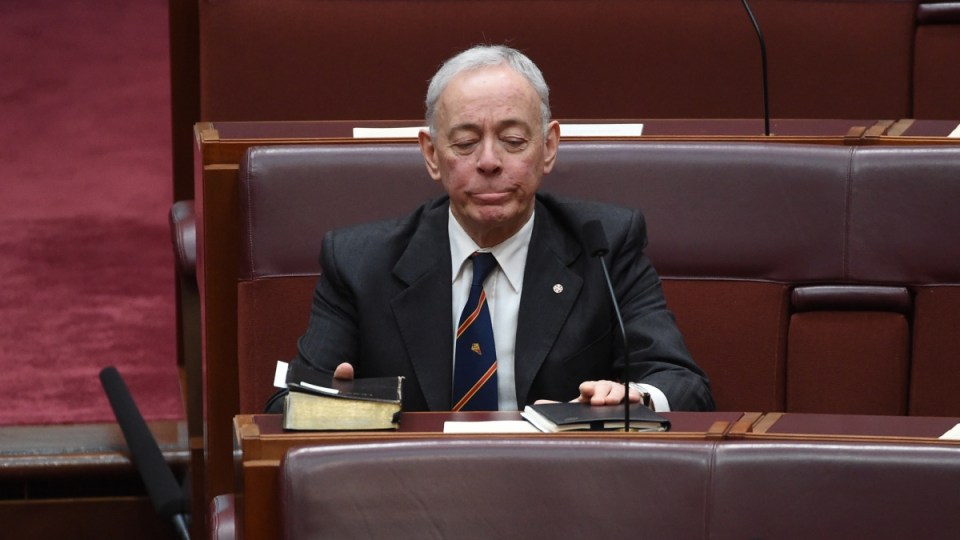 Bob Day really means it this time, but he was right when he quit the first time two weeks ago – his position as an Australian senator was untenable.

The unseemly on-again off-again resignation of the Family First senator from South Australia reached some sort of conclusion on Tuesday when – under cover of the race that stops a nation – he handed his sign-off letter to Senate President Stephen Parry, effective immediately.

And claims have now emerged that he may have been invalidly elected in the first place after claims that Mr Day’s taxpayer-funded Adelaide electorate office was in a building in which he had a financial interest.

That could put him in breach of section 44 of the constitution, which states that any person with any direct or indirect pecuniary interest in any agreement with the Commonwealth – except as part of a company with more than 25 people – “shall be incapable of being chosen or of sitting as a senator or a member of the House of Representatives”.

The latest revelations aside, Mr Day’s exit should have been instant when he first tried to look like he was doing the “noble thing” a fortnight ago with the revelation his building empire had collapsed leaving more than 200 houses unfinished and a $38 million debt to creditors. 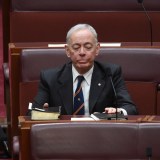 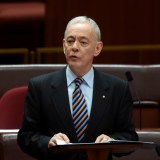 That is a lot of ordinary Aussie families out of home and investment while the good senator from the party that supposedly puts families first kept raking in his almost $4000 a week for representing the people of South Australia in the Federal Parliament.

Bob Day should never have entered Parliament while his Home Australia Group was in trouble, which it was when he decided to take a tilt at the Senate under the banner of Family First, after having failed to win any kind of seat for the Liberal Party (he took his bat and ball and left the Libs after losing a preselection in 2008).

The self-indulgent manner in which he quit the Senate, however, mirrors his brief stint in Canberra where he saw himself as a deal maker between the crossbench and the government.

The union-busting, climate change-denying monarchist provided the Abbott-Turnbull government crucial votes on almost all of the Coalition’s motions and legislation since he was first elected in 2013.

Not that it earned him any favours really. When he tried and failed to broker a deal with Senate crossbenchers to support the government’s industrial relations legislation (to bring back the Australian Building and Construction Commission), Prime Minister Malcolm Turnbull took the nation to a double dissolution election – under new voting reforms designed to all but wipe out independents.

That was one dispute Mr Day had with the government. He mounted a High Court challenge against the voting reforms.

His case failed, but so did Mr Turnbull’s election hopes. Mr Day snuck back in at this year’s election, joining a host of minor party and independent senators the D-D was supposed to have kept out.

And making the Prime Minister more reliant on Mr Day’s vote and persuasion skills in the upper house.

Which is one reason why Mr Day stepped back from his original resignation. By staying in until the end of the year, he could give the government his much-needed vote on the ABCC and the marriage equality plebiscite.

Just as indulgent, however, Mr Day was hanging around so he could shore up support inside his party for his hand-picked successor.

The pressure was too great. No one believed he was doing anything noble by remaining a senator while investors in his liquidated company suffered.

Late on Tuesday, Senator Parry emailed all senators a notice suggesting Mr Day might have been invalidly elected.

This now throws up all sorts of issues concerning the Constitutional rules to replace him. Labor is seeking legal advice. Mr Day’s replacement now might not even come from his own party.

That would be a further indignity he has handed Family First.

The very first senator elected from that party, Steve Fielding, was renowned for his attention-grabbing stunts, but there was no doubting his work ethic and his ethics in general.

And he certainly wasn’t a rubber stamp for government legislation.

When asked by The New Daily to comment about Mr Day and what the saga meant for the Family First vote, Mr Fielding declined.

“I was conscientious and worked hard and if I had my time over I would do it all again,” he said.

“But my time there has gone. Some people want to keep hanging on. I’m not one of them.”