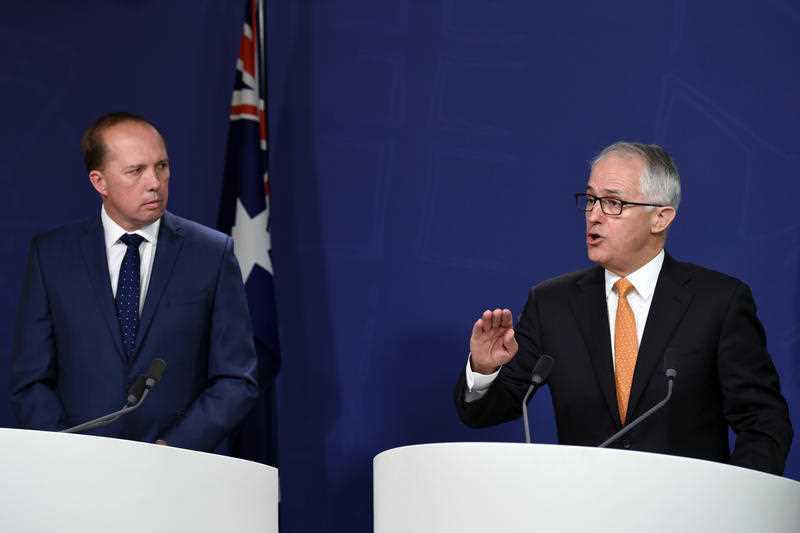 Immigration minister Peter Dutton and Prime Minister Turnbull are trying to do a deal with the US on refugees. Photo: AAP Photo: AAP
analysis

On Sunday, after he held a news conference with Immigration Minister Peter Dutton, Malcolm Turnbull phoned the Opposition Leader.

The Prime Minister briefed Bill Shorten on the government’s intention to give legal status to Kevin Rudd’s threat that anyone coming by boat to seek asylum “will never be settled in Australia”.

Just as there was no news release, there was no detail provided to the Labor leader. On Monday, Mr Shorten went so far as to claim “they have refused to release the legislation”.

He characterised the proposal to stop genuine refugees who subsequently become citizens in another country permission to visit Australia for many decades to come as “ludicrous on face value”.

New Zealand Prime Minister John Key is similarly in the dark. He is not sure how it would work if genuine refugees were given New Zealand citizenship status only to then not be given rite of passage a New Zealand passport would afford them.

Key, on Sky News, seemed singularly unimpressed and uninterested in being an accomplice to rendering some of his fellow countrymen second-class citizens. This suggests the government is not looking across the ditch to resettle refugees holed up in Manus and Nauru.

Labor’s first response was to see the announcement as a distraction from the government’s failure to find promised third countries of resettlement.

The timing on Sunday smacked of another attempt to set the agenda for the week and put Labor on the back foot. Mr Dutton, at his Monday news conference, attacked Labor 18 times and Mr Shorten 14.

But Mr Shorten says the deal is more about keeping One Nation and the right wing of the Liberal Party happy. He said it was Pauline Hanson now pulling the Prime Minister’s strings. 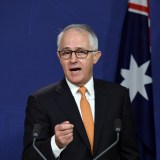 Ms Hanson duly obliged by going on morning television and fully endorsing the plan. Mr Turnbull says a very clear message is needed. His office says the target is more, the 14,000 would-be refugees in Indonesia and people smugglers ready to ply their trade.

Ms Hanson says the message is “refugees are not welcome here”.

She wrongly says the majority come here for economic reasons. Fleeing persecution isn’t a good enough excuse for her anyway. She says Australians are fed up with refugees getting “housing, health care, legal aid, furniture and cars”.

Mr Turnbull was reluctant to “comment” on Ms Hanson’s heartless prejudice. He defended Australia as having one of the most generous humanitarian intakes in the world.

The One Nation panic factor

But while wedging Labor is for Liberals always a good idea, there is another factor at work. It is the sheer panic in the LNP – the hybrid in Queensland of the Liberals and the Nationals, about the Hanson vote.

The federal election saw One Nation preferences leaking by as much as 50 per cent to Labor in electorates where the party’s how-to-vote card directed them to the LNP.

If that happens at the next state election, a repeat of 1998 could see the LNP’s representation decimated. In that election, 11 One Nation candidates won seats and Labor was handed a handsome win.

Deputy Prime Minister Barnaby Joyce is doing his best to head that off by outdoing Ms Hanson. Last week he attacked foreign land ownership in terms of Australians not wanting to be “renters of their own country”. He equated selling off the farm with selling out our sovereignty.

Maybe Mr Turnbull is taking a leaf out of John Howard’s 2001 playbook. Worried he may not win the election, Mr Howard threw the switch to xenophobia and border security. It worked like a treat.

The PM will be sweating on the next Newspoll.

Shoring up the votes. Turnbull’s response to the Hanson ‘panic’