Barnaby Joyce is a deputy prime minister running his own show with little regard for the rules that bind most MPs, according to those working with him and observers of political ethics.

While the government reels over the resignation of Solicitor-General Justin Gleeson and the legal advice saga casting a grubby shadow on Attorney-General George Brandis, Mr Joyce’s antics are also causing unprecedented grief for the Coalition.

With the so-called “Hansard-gate” affair revisited this week upon the revelation the Deputy PM’s integrity was questioned by the department head he subsequently sacked, some are pointing to a pattern of disturbing behaviour.

Paul Grimes, who at the time was Agriculture Department secretary, sent Mr Joyce (who is also the Agriculture Minister) a one-page letter in March 2015 saying: “I no longer have confidence in my capacity to resolve matters relating to integrity with you.

“This follows the sequence of events before and following the alterations to Hansard that were made in October 2014.”

The letter was sent 10 days before Mr Joyce sacked Dr Grimes, while also continuing to blame a “rogue staffer” for having a Hansard transcript altered after the Deputy PM incorrectly told Question Time the farm household allowance could be accessed immediately by drought stricken farmers.

The government has spent tens of thousands of dollars over the past 18 months trying to keep the letter secret.

But its release this week has sparked some interesting reactions inside the government. 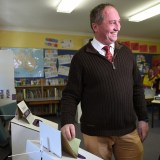 “That’s just Barnaby,” said one senior Nationals operative, who asked not to be named.

“And Barnaby is going to do what Barnaby wants – rules or no rules.”

Another member of the party said the Nationals were actually “pleased about the Brandis stuff” because it was “keeping the Barnaby mess buried”.

“We have seen some unusual activity by this senior minister, who is occasionally the acting prime minister,” Professor Uhr said.

“The Grimes affair has come back this week with the release of that letter and on top of that we have the Brandis-Gleeson affair. These two senior public servants have effectively fallen out with the government.

“Are these exceptions to the rules or are new rules being made as we go along?”

Scant regard for considered advice

Professor Uhr, who specialises in political ethics and accountability, said Mr Joyce has displayed form in doing things with scant regard for considered advice.

“Another big issue is how he is transferring public servants into his own electorate of New England, raising all sorts of questions,” he said.

“These things are usually done after a course of due diligence. We haven’t seen any due diligence in this case.

“I haven’t seen any advice coming out of that decision. It just seems it’s a convenient decision to reward his electorate after a hotly contested election there.”

Shadow agriculture spokesman Joel Fitzgibbon said Australian democracy was under attack and ministerial responsibility in decay just so Malcolm Turnbull could cling onto his job as Prime Minister.

“Anyone reading the letter from Dr Grimes … can be in no doubt that Barnaby Joyce was into the Hansard changes up to his eyeballs and that he misled the House on two occasions,” Mr Fitzgibbon said.

“As a result of all of this, a very senior, respected and professional public servant has lost his job. He should not have lost his job.”

Mr Joyce has said little on the subject since the letter’s release; his office saying only that he is pleased to have a good working relationship with the current department secretary Daryl Quinlivan.

“This letter is not a direct insight into the working relationships of the Department and the Deputy Prime Minister, and has not been for more than 17 months,” a spokeswoman said.