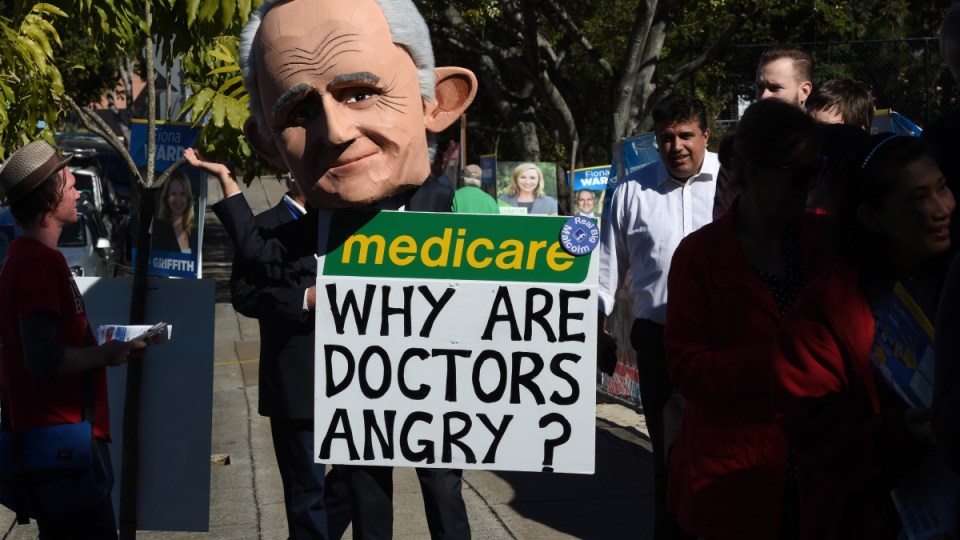 The federal director of the Liberal Party Tony Nutt has furiously denounced Labor’s election campaign on Medicare privatisation, calling it a “new low” in Australian politics.

Mr Nutt lambasted the so-called “Mediscare” campaign in his post-mortem federal election analysis at the National Press Club in Canberra.

He repeatedly said Labor’s claim that the Government planned to privatise Medicare was a “cold-blooded lie” aimed at poorer and older voters who were scared about losing cover.

“The really outrageous aspect of the Mediscare was that it was coldly, ruthlessly and callously targeted at vulnerable Australians,” Mr Nutt said.

“The Mediscare campaign affected votes and seats and contributed to the defeat of a number of MPs by reaching a new low, cynically and cruelly exploiting some of the most vulnerable in our society.

“I call on the Labor Party to pledge to never again behave in that way and use those tactics.”
Lliberals director Tony Nutt

“I call on the Labor Party to pledge to never again behave in that way and use those tactics.”

The federal director said he felt “emotional” when discussing the Medicare campaign, because he personally knew older voters who had been frightened by Labor’s claims.

He rebuffed journalists who pointed out that the Coalition had also played hardball when campaigning against the carbon tax in the 2010 election.

‘Govt must work with health’

The Coalition warned that the industrial town of Whyalla would be “wiped out” by the carbon tax — and predicted that the cost of a leg of lamb could skyrocket to $100.

But Mr Nutt said while journalists could debate the carbon tax rhetoric used by the Coalition, they were attacking a policy which existed — while Labor’s campaign was “pure fiction”.

“You’ve got to draw the line somewhere. Are we really saying that taking an absolute lie, a cold-blooded lie and shoving it down the throats of vulnerable people in their 70s and 80s, is acceptable?” Mr Nutt said.

Mr Nutt was also grilled about personal donations Prime Minister Malcolm Turnbull made to the cash-strapped Liberal Party in the lead-up to the election.

The Australian has reported that Mr Turnbull donated more than $2 million to the party, but the Liberal Party has refused to confirm or deny the story and Mr Turnbull has evaded questions on the donation.

Mr Nutt refused to reveal any information at the Press Club.

“The Liberal Party obeys the law and the law provides that returns will be put into the Australian Electoral Commission at the end of October, the commission will go through its processes and they will be published early next year,” Mr Nutt said.

The veteran administrator also cautioned against any sweeping changes to laws around foreign political donations in the wake of the scandal which enveloped Labor senator Sam Dastyari.

Labor has tried to pivot from the scandal by calling for a ban on all overseas donations, but Mr Nutt warned that efforts at campaign finance reform in the United States had backfired badly.

“The US is a graveyard of well-intended campaign finance reform that winds up with hugely unhelpful developments.”
He also said that dual Australian citizens could be treated unfairly if a blanket ban was imposed.

“What’s a foreign donation? We have a lot of people here with dual citizens. Are citizens who have houses and businesses and activities in Australia, family in Australia, but also in some other countries … are they permitted as citizens to make donations or not?” Mr Nutt said.

“And if they’re not going to be permitted to make donations, what’s the legal basis on which they’re going to be prohibited from making donations?

“So if you’re talking about a purely foreign citizens or purely foreign entities, that’s one thing, but a lot of these people that people idly talk about are actually part of the wider Australian migrant experience.”