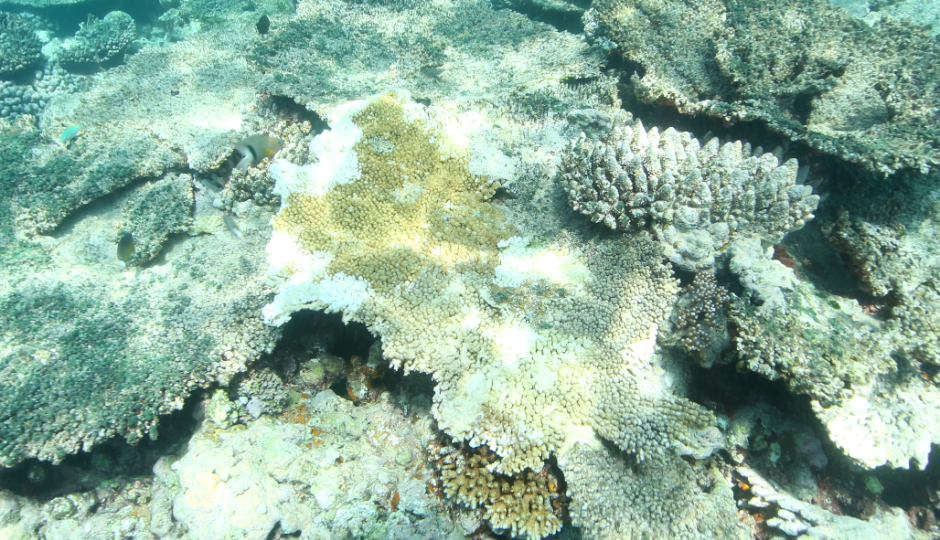 A new survey of the reef found more damage and coral killed by Crown of Thorns. Photo: Climate Council

New images of the northern Great Barrier Reef have revealed more evidence of the long-term impact of this year’s coral-bleaching event.

It has been nearly four months since aerial and underwater surveys revealed bleaching had killed 35 per cent of coral in central and northern parts of the reef.

The Climate Council’s Tim Flannery was part of a team that has visited a popular offshore reef about 54km from Port Douglas.

“We wanted to see how much repair there’d been, but the coral we saw bleached and in danger a few months back has now mostly died.”
Professor Flannery

“On top of that we’ve seen a whole lot of new damage, a whole lot of white coral out there that’s been killed by Crown of Thorns starfish because it was too weak to defend itself.

“I think it’s going to take years to recover.”

“What we’re seeing now is that much of the bleached coral has died and it’s started to be covered in algae. So there’s green, brown sludgey algae on a lot of the corals.”

Professor Hughes, who is also a Climate Council member, said the impacts on the rest of the environment, such as fish species, was clear too.

“The composition of the fish community has changed,” she said.

“There’s still a lot of fish that eat the algae and they’re doing quite well. But fish like parrot fish, that eat the coral, have disappeared.”

Coral that has not died from bleaching can recover, but severely bleached reefs can take more than a decade to return to their former condition.

Tourism operator John Rumney, who has been visiting the reef for 15 years, said he had also noticed a decrease in fish.

Other parts of the reef, especially southern sections, have not been as badly affected and are expected to recover.

About 40 per cent of coral dead in some parts of reef: report