Bill Shorten warned a plebiscite would subject LGBTI Australians to a "campaign of vitriol and prejudice". Photo: ABC

Prime Minister Malcolm Turnbull has attacked the Opposition Leader over his position on legalising same-sex marriage, saying his stance against the plebiscite is “demeaning” to voters.

The comments came during Question Time, when Mr Turnbull was pressed on the issue of funding for campaigns associated with the proposed plebiscite, an issue which has been dividing members of the Coalition.

Bill Shorten asked Mr Turnbull whether he promised funding to the Anglican Archbishop of Sydney, as recently reported.

Mr Turnbull refused to answer the question, instead saying Mr Shorten had insulted voters by opposing the public vote.

“He is basically saying Australians are unable to have a civil discussion about a fundamental question,” he said.

“He demeans the people he claims to represent. He demeans their civility. He insults them. He disrespects them.” 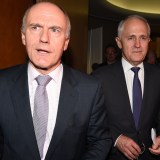 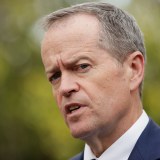 The comments came just hours after two bills to legalise same-sex marriage were tabled in the House of Representatives.

Mr Shorten and Greens MP Adam Bandt tabled the separate bills shortly after Parliament began, calling for a vote by politicians in lieu of the Coalition’s proposed plebiscite.

Mr Shorten told the chamber Australia was falling behind its international peers, citing 21 countries which have already legalised same-sex marriage.

He also cited fears about the impacts campaigns surrounding the plebiscite could have.

“There is a real risk that LGBTI Australians will be subjected to a well-organised, well-funded campaign of vitriol and prejudice,” he said.

“A No campaign would be an emotional torment for gay teenagers and if one child commits suicide over the plebiscite, then that is one too many.”

Mr Shorten’s comments were echoed by Mr Bandt, who called on Labor to back the bill he was tabling on behalf of the Greens and crossbench MPs Andrew Wilkie and Cathy McGowan.

Mr Bandt said the crossbench was the only “serious” option for legislative change.

“I invite Liberal and Labor MPs again to join as co-sponsors of this bill to achieve marriage equality,” he said.

“If we all work together, we have a real chance to pass marriage equality through Parliament sooner rather than later without a divisive and wasteful plebiscite.

“If we all work together, wedding bells could be sounding before Christmas this year.”

Both bills were seconded before debate was adjourned.