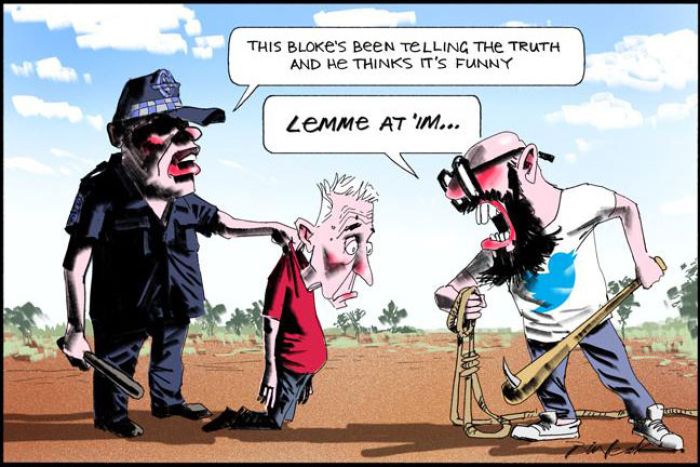 The creator of a highly controversial cartoon in The Australian newspaper has hit back at his critics and defended his work.

Bill Leak’s cartoon on Thursday showed an Aboriginal child being handed back by a police officer to an apparently drunk father who cannot remember his son’s name.

After widespread condemnation on social media, Leak has hit back, describing his critics as “sanctimonious Tweety Birds having a tantrum”.

He has drawn a second version of the cartoon, showing himself being handed by a black policeman to a man wearing a Twitter T-shirt and carrying a club and a noose.

Leak has defended his work and claims he is speaking the truth about violence and abuse in Indigenous communities.

In a statement, The Australian said: “Bill Leak’s confronting and insightful cartoons force people to examine the core issues in a way that sometimes reporting and analysis can fail to do.”

But Rod Little, the co-chair of the National Congress of Australia’s First Peoples, maintains the cartoon is racist.

“I think the cartoon is totally offensive. I think the defence is typical of ingrown prejudice and racism throughout this nation.”
Rod Little

Mr Little said the National Congress would be considering lodging a formal complaint about the cartoon, and has had non-Aboriginal people tell him they will be lodging their own complaints.

Greens leader Richard di Natale said he had lodged a complaint with the Press Council, describing the cartoon as “implying that Aboriginal parents don’t love their children, that they are all slackers and drinkers”.

Indigenous Affairs Minister Nigel Scullion said he was appalled by what he called “racist and tasteless material”.

In a statement, he said cartoonists have a rich tradition of irreverent satire but there is absolutely no place for depicting racist stereotypes.

Cartoons ‘should be placed back in 19th century’

Journalist Amy McQuire from the Brisbane Indigenous Media Association said she is outraged about the cartoon and she is calling on Leak to resign.

“I wasn’t completely shocked, because I know what Bill Leak does before,” she said.

“But particularly in the aftermath of those really distressing images of the torture of young kids, I thought that was totally irresponsible because the blame always goes on blackfellas and black parents and we’ve seen in the past the consequences of that.

“And also, those sort of cartoons, they should be placed back in the 19th century.”

Ms McQuire said if Aboriginal Australians wanted to have conversations about the problems within their communities, they should have them themselves.

“We shouldn’t have white cartoonists sitting up there with all the power in the world, you know, the backing of Murdoch media behind them, being able to do it like that.”
Journalist Amy McQuire

“That’s a very unsafe way for us to have these conversations and now the really important conversations we have to have, very few blackfellas will want to talk about it openly.

“It just contributes to this real fear to speak out for the fear of the political consequences and the consequences from white media, so I was completely outraged and I think he should be sacked.”