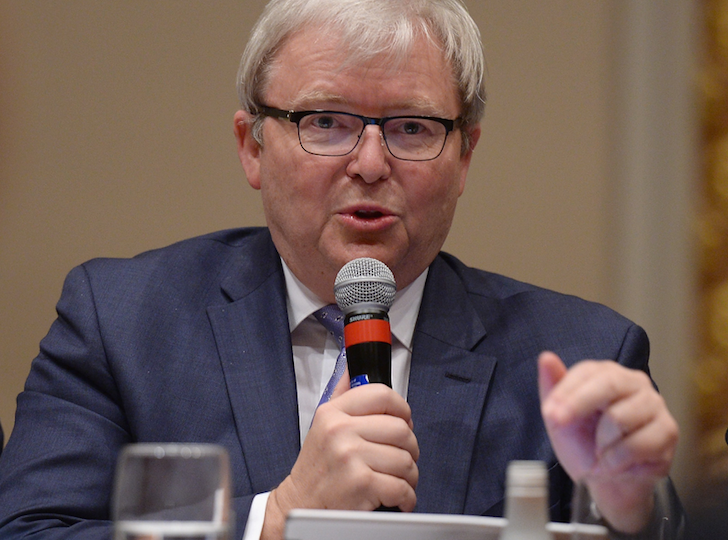 Kevin Rudd is totally unsuitable and would be a “farcical” choice as United Nations Secretary-General, says his biographer Nick Stuart.

Mr Stuart, who wrote an unauthorised biography of the former prime minister in 2007, said it was farcical for Mr Rudd to be considered and that all five permanent members of the United Nations had “very good reasons to say ‘no’ to him”.

“The fact that someone speaks Chinese isn’t enough to convince the Chinese that they should actually allow him to organise this organisation, to take charge of the organisation, because the thing is, he’s called the Chinese ‘rat f***ers’.”

Meanwhile, The Australian has reported that Mr Rudd’s only supporter inside the Turnbull Cabinet is Foreign Minister Julie Bishop and that a vote for Rudd would be a powder keg to the new government.

Mr Stuart also fired a shot at Opposition leader Bill Shorten for his support of Mr Rudd, saying it had shades of hypocrisy.
“Backing someone simply because, as Bill Shorten says, that he’s an Australian, and so is therefore somehow or another better, it’s farcical.
“I mean, Bill Shorten couldn’t even wait an entire term of Parliament to get rid of Kevin Rudd the first time he was Prime Minister. The idea that he should become the head of the United Nations is farcical.”

Mr Stuart there were 12 “quite credible candidates” for the UN job, and “you don’t need an unlucky 13th coming in at the last moment”.

‘He called the Chinese rat f***ers’: why Rudd’s UN bid is a farce