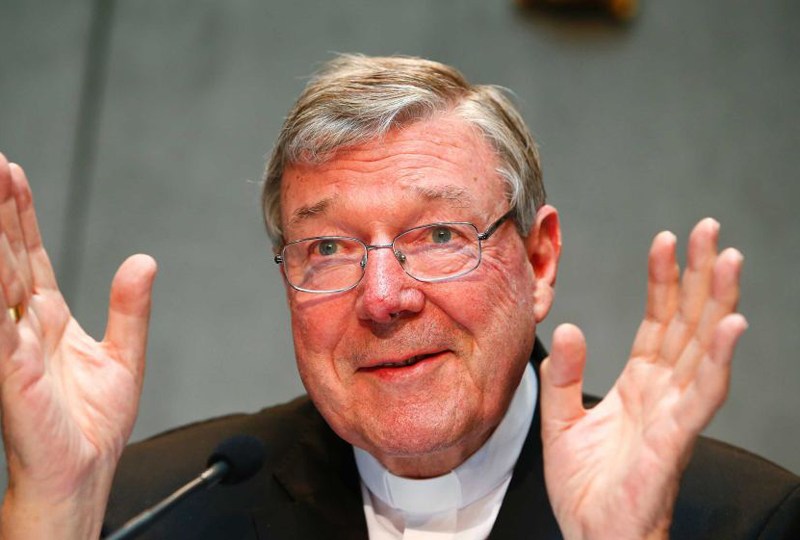 Victoria Police’s Taskforce SANO, which investigates complaints coming out of the Royal Commission into Institutional Responses to Child Sexual Abuse, has been examining the allegations by complainants from Ballarat, Torquay and Melbourne for more than a year.

They include allegations about incidents which allegedly happened during Cardinal Pell’s time as Archbishop of Melbourne in the 1990s.

In a statement to the ABC, Cardinal Pell’s office said he “emphatically and unequivocally rejects any allegations of sexual abuse against him”, and accused the ABC of mounting a smear campaign against him.

7.30 understands that the Pell case has been referred by Victoria Police to the Office of Public Prosecutions for advice. Two men claim Cardinal Pell groped them at a pool in the 1970s. Photo: Getty

The program has obtained eight police statements from complainants, witnesses and family members who are helping the taskforce with their investigation.

Victoria Police Chief Commissioner Graham Ashton confirmed last month that the taskforce was investigating multiple allegations against the Cardinal and, if necessary, detectives would fly to Rome to interview George Pell, although the Chief Commissioner said “it had not been put as necessary to me at this point in time”.

Mr Ashton declined to comment to 7.30, although his spokesman has confirmed to the program it is “very much a live investigation”.

The complaints include those by two men now in their 40s, from Cardinal Pell’s home town of Ballarat, who say he touched them inappropriately in the summer of 1978-79 when he was playing a throwing game with them at the town’s Eureka pool.

In another complaint, Torquay businessman Les Tyack gave a statement to the royal commission last year relating to an incident at the Torquay Surf Life Saving Club in the summer of 1986-87.

He said he walked into the club change rooms to discover a naked George Pell behaving in a manner that caused him concern in front of three boys he estimated to be aged between 8 and 10 years old.

A further complaint about George Pell that 7.30 is aware of relates to the period in the 1990s when he was setting up the Melbourne Response – the Australian Catholic Church’s first attempt to seriously address child abuse.

It involves two teenage choirboys who asked their parents to leave the choir soon after the alleged abuse had occurred.

One of the boys died in tragic circumstances two years ago and the other is working with Taskforce SANO detectives.

George Pell declined to be interviewed by 7.30 and did not address specific allegations, but said he had never abused anyone.

In a statement, his office said:

“The Cardinal does not wish to cause any distress to any victim of abuse. However, claims that he has sexually abused anyone, in any place, at any time in his life are totally untrue and completely wrong.”

The Cardinal is entitled to the presumption of innocence and police and prosecutors will decide whether any of the allegations warrant charges.

In a statement to an internal church inquiry headed by retired Supreme Court Justice Alec Southwell, the complainant alleged that on several occasions at a campsite on Phillip Island, the man known to him as “Big George” put his hands down his pants and “got a good handful of his penis and testicles”.

He said Cardinal Pell molested him on several occasions in a tent and once, under his bathers, when they were in the water, jumping in the waves.

The then-Archbishop Pell stood aside in 2002 while Alec Southwell conducted the inquiry for the Catholic Church.

At the time, Cardinal Pell said the allegations were “lies” and said he denied them “utterly and totally”.

Some time after the complaint was made a file was compiled on the complainant, who had been a wharfie, a convicted criminal and an alcoholic.

The details of the man’s criminal history then appeared in a newspaper article.

Justice Southwell said in his findings that the “complainant’s credibility was subjected to a forceful attack”, however he found the complainant’s evidence truthful.

He also found that George Pell’s evidence was truthful.

Cardinal Pell returned to his role as Archbishop, saying “there’s no mud to stick, I’ve been exonerated”.

In his statement, Cardinal Pell accused the ABC of a “scandalous smear campaign”.

“If there was any credibility in any of these claims, they would have been pursued by the Royal Commission by now.”

However, the royal commission advises that these sorts of allegations are outside its terms of reference, because it only investigates institutional responses to child abuse, and it refers any new complaints of clergy abuse to police.

It is expected to make findings on the Cardinal’s evidence about his role in the Church’s response to allegations of abuse by clergy in coming months.

Some of the behaviour alleged in the Taskforce SANO statements seen by 7.30 may not justify criminal charges, but does seem unusual and inappropriate for a senior priest.

The alleged behaviour raises serious questions about whether George Pell was ever an appropriate person to drive the Church’s response to child sexual abuse.

Forensic psychologist and former priest, Terry Laidler, says it also raises questions over whether he should stand aside from his position at the centre of Church power in the Vatican.

“I think, like everyone, he’s entitled to presumptions of innocence on criminal matters, to an assumption of goodwill on other matters,” Mr Laidler said.

“But I think once something gets to the level of allegations that, on any reasonable standard, are worth giving some credit to, no, I think he’s got to stand aside.”

If you’re experiencing emotional difficulties, please contact Lifeline on 13 11 14 or go to www.lifeline.org.au