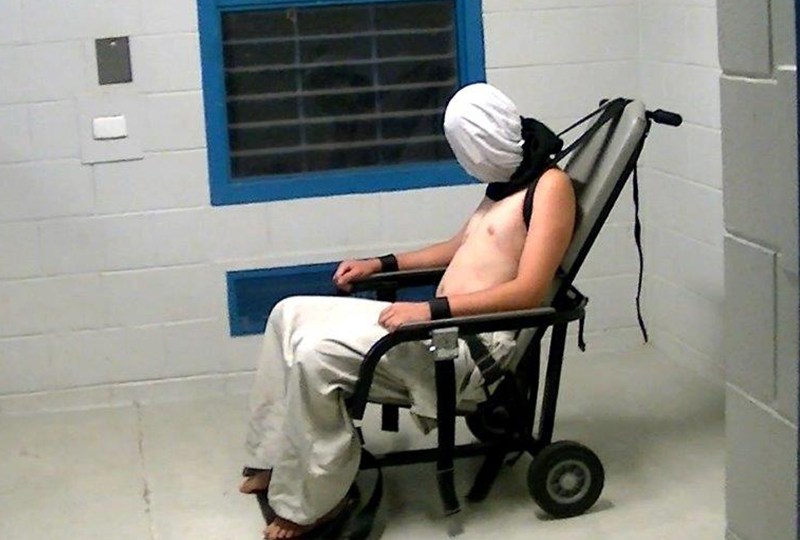 The shocking image of a hooded youth has gone global. Twitter/ABC

The ABC’s Four Corners report revealing the shocking mistreatment of children in a Northern Territory detention centre has claimed its first political victim.

John Elferink has been sacked as NT Corrections Minister after footage emerged of boys as young as 13 being abused by correction officers on Monday night.

NT Chief Minister Adam Giles, who admitted to being “shocked and disgusted” by the footage, will take over the role.

“Anybody who saw that footage on television last night on Four Corners would undoubtedly describe it as horrific footage,” Mr Giles said.
“I sat and watched the footage and recognised horror through my eyes.”
Prime Minister Malcolm Turnbull said he was “deeply shocked”, Opposition leader Bill Shorten has called it Australia’s “national shame” while indigenous senator Pat Dodson blasted it as a matter of “utter shame”.

Lawyers and human rights activists have called for the NT youth facility to be shut down for good.

Mr Turnbull was swift in his reaction to the revelations, announcing a royal commission into the abuse of teenagers within hours of the footage being broadcast.

The shocking footage showed indigenous offenders as young as 13 being stripped naked, tear-gassed and held in solitary confinement for weeks at the centre in 2014 and 2015.

In one video, a 17-year-old is hooded, shackled to a “mechanical device” chair and left alone for two hours.

In another, a guard is heard saying: “I’ll pulverise the f***er”, as a youth in isolation bangs at the windows.

The pictures of a hooded, shackled youth, reminiscent of scenes from the notorious Guantanamo Bay or Abu Ghraib prisons, have gone around the world, resonating as a moment of shame for human rights in Australia.

Mr Turnbull told ABC radio: “We have here a very troubling state of affairs where clearly there has been mistreatment of young people.

“We need to expose the cultural problems, the administrative problems that allowed this type of mistreatment to occur.”
Malcolm Turnbull

“We need to understand how it was that there were inquiries into Don Dale (youth detention centre) as a place where there had been allegations and claims of abuse … that did not produce the evidence that we’ve seen last night.”

Mr Turnbull promised the country would “get to the bottom of it” through royal commission, which is likely to be led by a senior lawyer or retired judge and will have powers to compel witnesses and the production of evidence.

It will be jointly run by the federal and NT governments and the terms of reference will be drafted in the next few days.

NT Chief Minister Adam Giles said he was “shocked and disgusted” by the revelations.

“A community is judged by the way it treats its children and serious questions were raised,” he said in a statement.

“Equally, the Northern Territory government does not resile from its tough approach to those who don’t want to respect others people’s property or safety.”

But Mr Giles also noted the powers of custodial officers were governed by polices and procedures and had limits.

Lawyers and human rights activists have called for the NT youth facility to be shut down for good.

Federal Opposition Leader Bill Shorten says Labor is ready and willing to work with the government on a royal commission.

“This national shame demands national action,” he wrote on Facebook.

Federal Liberal MP Ken Wyatt said he was so stunned at the revelations he immediately texted the prime minister to tell him “there was need to watch the program”.

“I was angry. I certainly sent a text message to the PM and then I spoke with Arthur Sinodinos about the issue and the need for a national intervention,” he told reporters in Melbourne.

“The anger I felt within that we, as a first-world nation, are doing this to Aboriginal kids in custody also beggars the question were there other children who weren’t indigenous that were subjected to the same processes that we saw last night.”