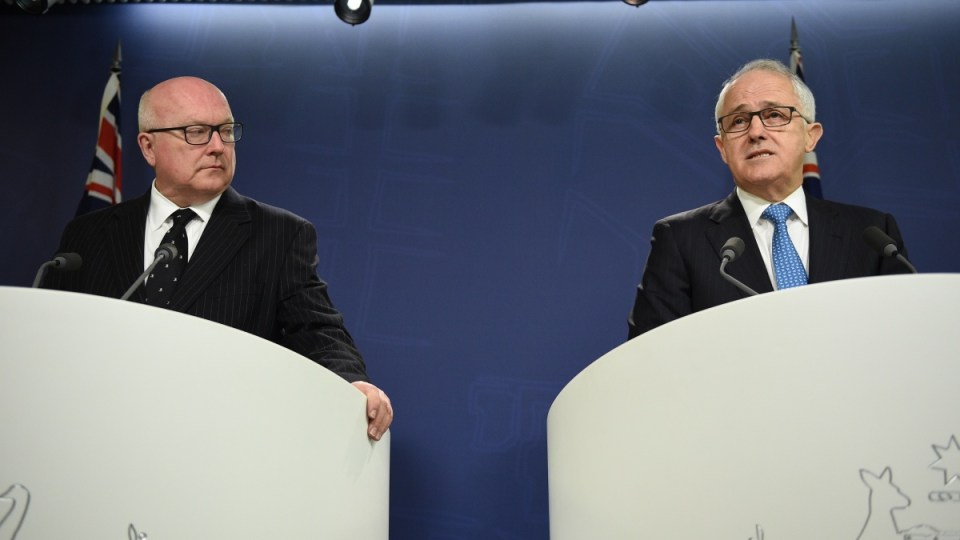 Mr Turnbull will work with state and territory leaders to roll out post-sentence preventative detention for terrorists. Photo: AAP

The federal government is seeking support from the states for a range of new anti-terror laws, including the right to imprison terrorists indefinitely.

Speaking to reporters in Sydney on Monday, Prime Minister Malcolm Turnbull said the power of Islamic State, or “Daesh”, to recruit impressionable Australians had to be destroyed.

“Daesh was able to create the impression that it was invincible and … because of their rapid territorial gains, they created the impression and claimed that like the armies of Mohammed they would sweep across Europe and they said they were going to stable their horses in the Vatican,” Mr Turnbull said.

“It has been vital to turn the tide against them in the field,” he said. “And as they are coming under greater pressure, as they are losing control of cities and towns and territory, they are being recognised as a failing organisation.”

As part of the anti-terror push, Mr Turnbull has written to state and territory leaders asking them to quickly pass laws that could keep terrorists in jail if their ongoing threat is assessed as serious.

The laws would mean terrorists could remain imprisoned after their sentences expire if a court is convinced they would reoffend.

The Prime Minister said Australia could not afford to be complacent, especially in “the wake of Orlando, Nice and other terrorist incidents, as well as our own experience of 16 counterterrorism operations since September 2014 resulting in charging of 44 persons”.

“They [the laws] balance the need to keep the community safe with our commitment to privacy and the rights of the individual,” he said.

Federal Attorney-General George Brandis said he wanted the passing of the proposed terror laws to be similar to those in some states that keep sex offenders in jail after they have served their sentence if they still posed a serious risk to the community.

Mr Brandis said the continued incarceration would only apply to very high-risk offenders who show no signs of rehabilitation when they are near the end of their sentence.

They are people who would be assessed to pose a continuing and serious risk to community safety,”
Senator Brandis

“I make no apology for the Government taking the view that if a person, having served a sentence of imprisonment for a serious crime, shows every indication of a willingness to repeat that crime, to reoffend as soon as they are released, they should remain behind bars,” the Attorney-General said.

The process of continued incarceration would be overseen by the courts and informed by detailed medical and psychological checks.

Mr Brandis would not say if the Government wanted the laws because of any specific convicted terrorists presently in jail.

‘Measure will only apply to most serious category of offender’

Keeping terrorists in jail after their sentence expires raises legal concerns about procedural fairness and double punishment, but Senator Brandis argued that state laws for sex offenders have been upheld by the high court.

He said the measure would only apply to the most serious category of offender.

He also said existing measures like control orders might be used instead for some terrorists, meaning instead of staying in jail longer they might have to wear a tracking device, report regularly to police or be banned from using the internet.

Opposition Legal Affairs spokesman Mark Dreyfus told a media conference the proposed legislation would be subjected to “thorough scrutiny” to ensure the balance between security and freedom, and should be only used in the most extreme cases.

“That would be where an unacceptably high ongoing risk is posed to the community and there has been no rehabilitation of the prisoner during his or her original sentence,” Mr Dreyfus said.

“Checks and balances on this new power are going to be crucial to prevent the possibility of legislative over-reach or unjust deprivation of liberty,” he added.

State leaders were briefed by ASIO’s Director General last December at Mr Turnbull’s first council of Australian Governments meeting and agreed to the idea, then endorsed the next step in April.

Mr Turnbull also said the government would adopt the recommendations of a parliamentary committee that assessed the previous proposed of anti-terror legislation, and this would be put to parliament as soon as possible.

The bill, which was introduced late last year, extends control orders to juveniles to the age of 14, down from 16. It will also introduce a new offence of advocacy of genocide.

Mr Brandis will meet with state and territory attorneys-general in coming days to discuss the new laws.