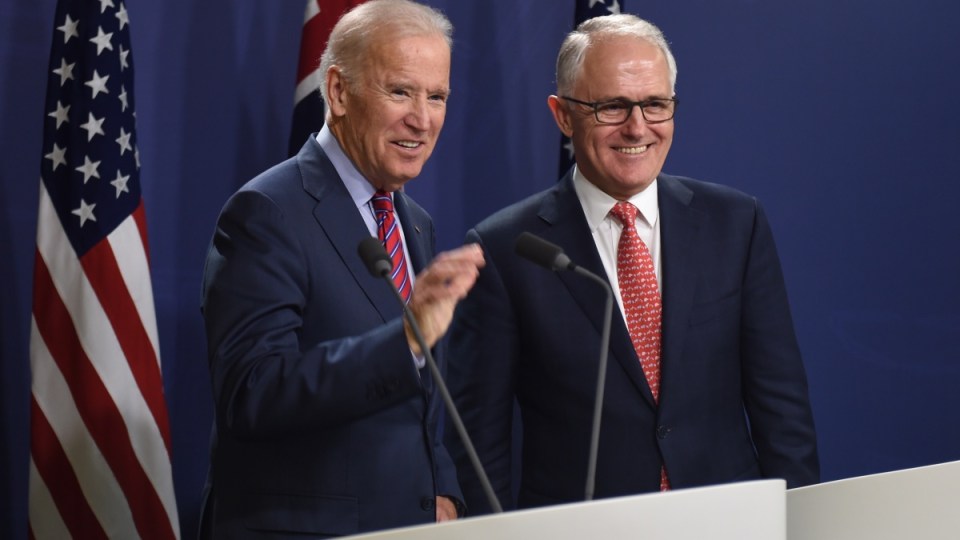 Malcolm Turnbull and US vice-president Joe Biden speak during a press conference in Sydney. Photo: AAP

The US vice-president has reaffirmed his country’s status as a Pacific power during a visit to Sydney.

Joe Biden said the US along with Australia had been the basis for regional stability that had allowed many countries to grow, including China, Japan and South Korea.

The pair announced Australia would expand the training mission inside Iraq to include federal and local police.

“One of the most important objectives now in Iraq is to ensure that the Iraqi police forces, their gendarmerie forces, are able to maintain the peace in areas that have been liberated from Daesh or ISIL as the Iraqi security forces and counter-terrorism forces progress,” Mr Turnbull said.

A 300-member Australia and New Zealand team is currently operating inside Iraq, training the Iraqi army for the fight against Islamic State.

Mr Biden said Australian forces were the best trainers in the world.

“They’re talking about a significant number of police needing to stay behind to reconstruct in key safety and security areas that have been reclaimed from ISIS,” Mr Biden said.

On trade, Mr Biden said more needed to be done to “set the economic rules of the road”.

Mr Turnbull has heaped praised on the vice-president’s political capital saying the “Biden touch” will help get a controversial Pacific trade pact through Congress.

The 12-country Trans-Pacific Partnership is facing deep resistance from some political quarters in Washington ahead of the US presidential election in November.

The prime minister acknowledged the deal faced obstacles but he was confident Mr Biden’s eloquence would help get it over the line.

He said he had discussed innovation with business leaders, entrepreneurs and researchers and signed three agreements to share information on cancer.

Mr Turnbull said Australia has no stronger alliance than that with the United States.

He said the two nations had a shared passion about “freedom, the rule of law, democracy and the right of very person to be able to aspire to realise their dreams”.

French foreign minister hails defeat of Morrison and his ‘notorious incompetence’
Tiger Woods quits PGA tournament after the worst round of his career
COVID claims 45 more lives as nationwide daily cases soar to 18,000
Volodymyr Zelensky: How war will end as Ukraine ‘breaks backbone’ of Russian army
Peter Dutton touted as next Liberal leader as he claimed victory in Dickson
‘The urgency of the situation’: WHO steps in as monkeypox cases erupt around the world
Bill shock looms for solar-power users
Today's Stories