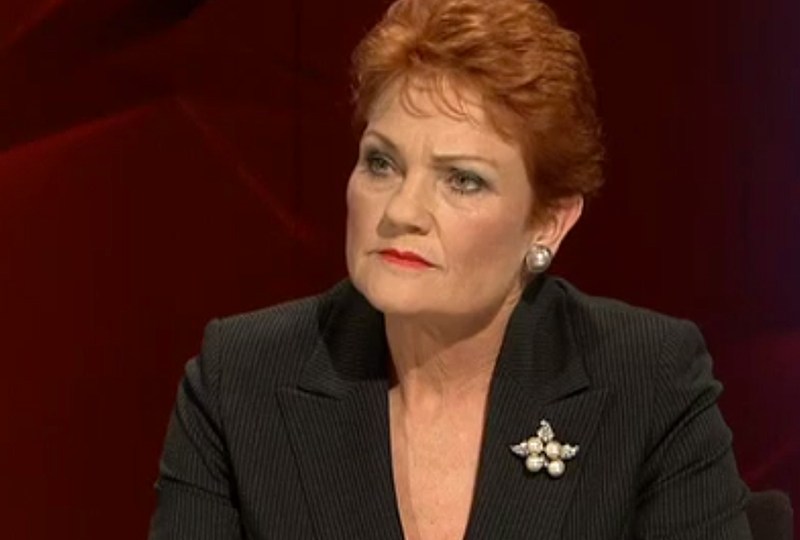 On ABC’s Q&A program on Monday night, Khaled Elomar explained how he suffered abuse in his day-to-day life, and how his young son was asking his father to explain “Islamophobia”.

“I work in Cronulla. I have worked there for eight years. I absolutely love the place,” Mr Elomar said. “Only recently, after your rhetoric has came onboard the media, almost every day I get called a Muslim pig because of you.

“I really do thank you for that because it just shows how much of a better person I am that I can choose to ignore these guys,” he added.

“People like yourself who have extremely dangerous and disturbing rhetoric, it’s a fuel to hatred, bigotry and ignorance.”

Ms Hanson responded: “There are a lot of Muslims and there are actually Muslims of my party, who have joined my party who want a peaceful life in Australia.

With all due respect @PaulineHansonOz, what is basis of your islamophobic feelings? Hate, Fear or Ignorance? #QandA https://t.co/BjSjuzVf13

“Isn’t it funny that your Grand Mufti won’t even come out and condemn the terrorist attacks that happened overseas or Imams or people that say they have no intention of assimilating into our society, or when you have problems in communities because people are living there,” she said.

“Why do you reverse it on me and say you’re blaming me for the problems in Australia when we have seen what is happening?”

Ms Hanson rebutted every pro-Muslim sentiment by pointing to the threat of terrorism and claiming her stance was justified because it would prevent loss of life.

The exchange was the most emotional flashpoint in a program dominated by Ms Hanson’s views on Islam.

There were also tense moments outside the ABC building in Ultimo when up to six people were arrested when hundreds of rival protesters gathered ahead of Ms Hanson’s appearance on the program.

About 60 officers, some on horseback, separated about 200 anti-Hanson protesters from up to 60 of her supporters.

A NSW Police spokeswoman said the police removed the men to prevent a breach of the peace.

But she said no charges would be laid against them and that overall officers at the scene had said the protest was peaceful.

On the show, Ms Hanson reinforced her desire for a royal commission into Islam and ban on Muslim migration to Australia.

While her often rambling, inaccurate and incoherent responses were given plenty of coverage during the program, her co-hosts showed no patience with her views.

“Twenty years ago it started off with blaming Indigenous Australians, then it became about ‘we’re being swamped by Asians’ and now it’s about blaming the Muslim and the Muslim community,” Labor Senator Sam Dastyari said.

“It is the politics of fear and division and Ms Hanson, you’re incredibly good at it,” the Sydney-based Muslim said.

She also apologised to another Muslim questioner who was slapped down and demonised by Ms Hanson.

“Many Australians don’t share the views of some folk on this panel and I do want to deeply apologise that you feel in any way discomforted or unwelcome in your own country,” Ms Waters said.

“I think that is grossly unfair and utterly uncalled for.”

All the members of the panel, which also included education minister Simon Birmingham and Senator Nick Xenophon, rejected Ms Hanson’s push for a royal commission into Islam and curbs on Muslim migration.

Watch Ms Hanson explain why Islam is ‘ideology’ and not religion:

.@PaulineHansonOz: Can you please explain what constitutes a religion and a cult with respect to Islam? #QandA https://t.co/Nz9HKcd12s

Labor victory fires up Tamil family’s hopes of return to their Biloela home
Analyst: Sharemarket will be anxious about a Labor pact with Greens
French foreign minister hails defeat of Morrison and his ‘notorious incompetence’
Tiger Woods quits PGA tournament after the worst round of his career
COVID claims 18 more lives as nationwide daily cases soar above 35,000
Volodymyr Zelensky: How war will end as Ukraine ‘breaks backbone’ of Russian army
Govt may ‘tinker’ with super
Today's Stories

Q&A: ‘Ms Hanson, I get called a Muslim pig because of you’