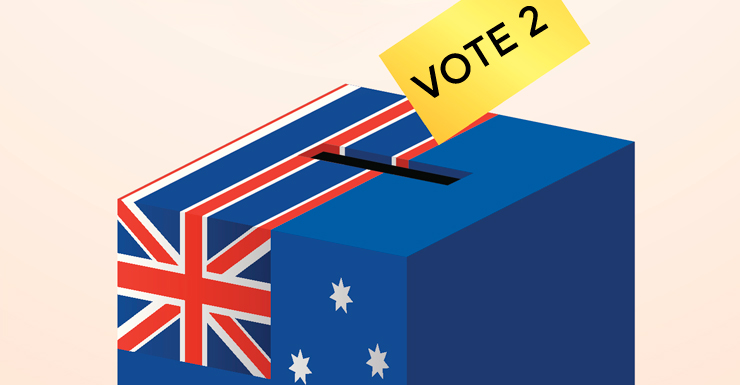 You may have noticed as polling day nears that Malcolm Turnbull and Bill Shorten have ramped up their pitch for your first preference vote.

The PM has told voters to lodge their ballot as if it’s the only vote that decides the election outcome. The Opposition Leader’s pitch suggests the only way to avoid the Liberal Armageddon is to vote Labor.

At one level, you wouldn’t expect the major parties to suggest otherwise. Neither has campaigned for second preferences since the Hawke Labor government in 1990.

This election, the majors are grappling with voters’ growing attraction to micro parties and independents. When the election outcome is tight, as the polls suggest this one might be, there is even a chance we’ll end up with a hung parliament, forcing the ALP or LNP to depend on a motley crew of unaligned MPs to form government.

Yes, both Mr Turnbull and Mr Shorten have metaphorically sworn on a stack of Bibles to not ‘do a deal’ with the Greens to secure the Lodge. They even signed a “pledge” to that effect in the Daily Telegraph.

Most of the candidates who would make up that hypothetical crossbench have also ruled out ‘doing deals’ with the Coalition or Labor in the event that neither wins an outright majority in the House of Representatives.

The independent member for Indi, Cathy McGowan, who hopes to defeat the Liberals’ Sophie Mirabella for a second time, has said she won’t sell her vote or lose her ability to “vote on issues as they impact on my community”.

The two country independents that helped Labor leader Julia Gillard form government in 2010 are both attempting a comeback.

Tony Windsor, who is trying to wrest his seat back from Nationals leader Barnaby Joyce, has ruled out any formal agreement this time. “If there was another hung Parliament … I wouldn’t be signing any document with any side, I would remain independent,” Mr Windsor has said.

Rob Oakeshott appears more conciliatory. He’d give Mr Turnbull as incumbent PM the first chance to form government. “I would not block his efforts to do so, and would accept his phone call if he wanted to formalise something in more detail,” Mr Oakeshott has said.

And then there’s Andrew Wilkie, another independent MP, who gave his support to the Gillard minority government in return for an agreement to reform the gambling industry — an agreement Ms Gillard welched on.

Mr Wilkie is cross that the current PM has claimed power-sharing arrangements between major parties and unaligned MPs leads to anarchy and chaos. He’s ruled out entering into any formal agreement “to provide ongoing support for any party after the election”.

Another unaligned MP likely to be re-elected is Bob Katter. He was the only crossbencher in 2010 to lend his support to Abbott instead of Gillard.

A surprise addition to the crossbench could be Nick Xenophon’s candidate in South Australia, Rebekha Sharkie, who has a good chance of claiming the seat of Mayo from embattled former Liberal minister Jamie Briggs.

And then there are the Greens, who have one candidate likely to be returned to the House of Representatives, Adam Bandt, and possibly one more after this weekend.

This means there will be a crossbench of at least four and as many as eight.

The Coalition would have to be reduced to 75 seats, 13 less than it technically holds now, to bring the crossbench into play. If Labor and other non-Coalition candidates win 75 seats between them, equalling the number of Coalition MPs, Rob Oakeshott would first give Malcolm Turnbull the chance to form government.

Mr Turnbull wouldn’t need to do a Gillard-style deal to make his claim. He would simply ask the lower house to make a vote of confidence in the Coalition government. If the vote passed, then the Turnbull government would proceed to govern. If it failed, Labor would get a chance to test its support in a similar fashion.

If both major parties fail, Australia would be treated to another election. Perhaps this prospect of being subjected to five more weeks of lies, dissembling and obfuscation will convince voters to elect a majority government this weekend.

Paula Matthewson is a former media adviser to John Howard and has worked for almost 25 years in communication, political and industry advocacy roles. She tweets and blogs about Australian politics under the pen name @Drag0nista.

How Australians may hang the Parliament