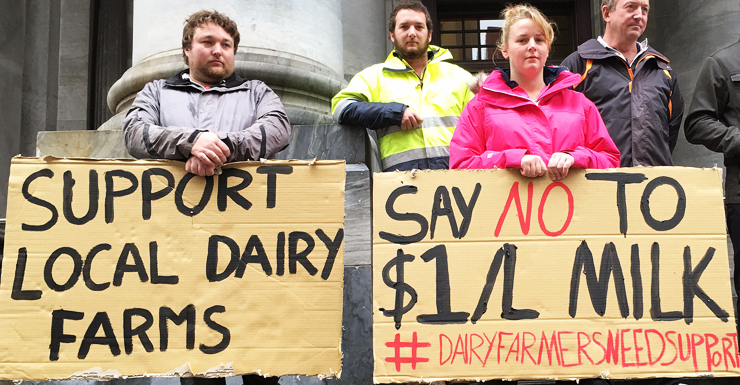 Dairy farmers already reeling from having their milk prices slashed have been handed another price cut for the upcoming season.

Many farmers faced huge bills when Murray Goulburn retrospectively slashed its milk prices in April to between $4.75 and $5.00 per kilogram of milk solids, down from $5.60.

“This opening price is below the cost of production for many dairy farmers and we’ll all need to pull together to get through the months ahead,” United Dairyfarmers of Victoria president Adam Jenkins said on Tuesday.

“Dairy farmers are still carrying the weight of MG’s poor management decisions that’s led to the debt they’re being forced to repay on the back of this low opening milk price.”

Murray Goulburn said it eventually expects to pay dairy farmers $4.80 per kilogram over the upcoming season, with prices set to rise slightly from the opening price.

“This is a conservative price, and it’s most likely that MG is erring on the side of caution, but it opens up the possibility of stepping up to a more reasonable price later in the season,” Mr Jenkins said.

“Global conditions have not improved, and the latest data suggests excess global inventories, including the impact of European intervention, may have surpassed the equivalent of six billion litres of milk,” Mr Mallinson said.

“We have set a robust forecast, and while there are a number of areas which may provide upside to our FY17 forecast, we do not believe it is prudent to include these in our forecast at this stage.”

The federal government has provided loans of up to $1 million or 50 per cent of the existing commercial debt of the business over 10 years to help out farmers.

Farmers angry at yet another cut to milk prices