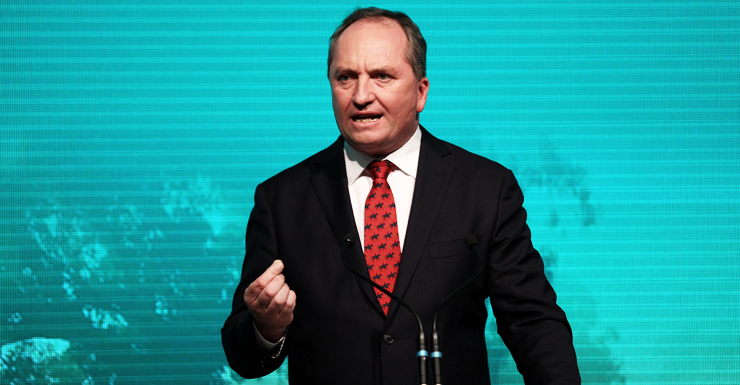 The advertisement released on Monday depicts two women seated in a coffee shop. One purportedly receives a text message from Mr Windsor asking to reignite a romantic relationship.

“It was okay for a time, I guess, but then he ran off with Julia,” the woman says, referring to Mr Windsor’s support for the minority government of Julia Gillard.

She sends a message in reply: “Not this time, Tony.”

In a statement, Mr Windsor said the “offensive gutter ad” inferred philandering on his part and had “deeply upset” his wife Lyn.

“They can throw whatever criticism at me but when it involves and upsets my family, that’s another matter,” Mr Windsor said.

“Mr Joyce and [campaign committee member James] Treloar should be the last to raise this issue — it’s not politics.”

The TV advertisement was funded by the Nationals, whose leader Barnaby Joyce is running against Mr Windsor to retain the northern NSW lower house seat.

The Nationals refused Mr Windsor’s demand for the ad to be removed.

“The commercial never suggests Mr Windsor has been unfaithful to his wife,” NSW Nationals director Nathan Quigley said in a statement.

“It does suggest he has been unfaithful to his electorate.

“An offer to Mr Windsor’s camp for both sides to withdraw all negative material has been declined.”

Matildas will be keen to forget 7-0 drubbing by Spain
Upcoming stats will reveal where and how hard rates are hitting economy
Victorian MPs pocket a tidy 2.75 per cent pay raise
Reserve Bank review isn’t a ‘get the governor’ exercise: Jim Chalmers
‘Violence for weeks’ feared after landmark US abortion ruling
Aussie Hannah Green within striking distance of Women’s PGA Championship lead
Calls for Australian republic after Brexit plebiscite
Today's Stories