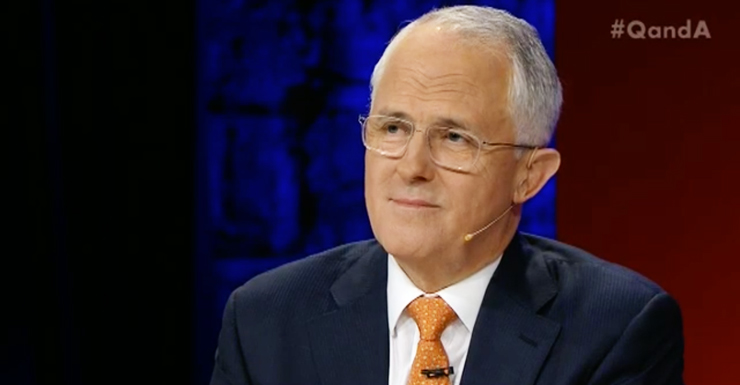 “I am the Prime Minister … I am not the dictator.”

Confronted on the ABC’s Q&A with a string of hard questions surrounding the apparent compromise of his stated principles on same-sex marriage and climate change, Prime Minister Malcolm Turnbull has acknowledged the limitations of his personal power.

It was a neat explanation for disappointment expressed by many questioners in the hand-picked Q&A audience at Brisbane’s Power House on Monday night.

Although he supported a conscience vote of the parliament on same-sex marriage, his predecessor Tony Abbott had proposed to the joint Liberal/National party room that there be a plebiscite. The plebiscite decision was binding on the Coalition and was part of the Liberal Party’s coalition agreement with the Nationals.

Mr Turnbull said he was a believer in cabinet government which involved prime ministerial compromise as “the first among equals”.

“I am not the dictator,” he replied to a questioner concerned about the LGBTI community being exposed to hate and homophobia during the plebiscite campaign.

Mr Turnbull said he believed Australians would be respectful. Ireland had conducted a plebiscite and voted by majority for marriage equality. And he felt sure there would be a resounding ‘yes’ vote in Australia.

How can I trust you @TurnbullMalcolm, when you’ve been swayed by ultra-conservative wing of your Govt? #QandA https://t.co/zfCRb2vwqr

‘That is my pledge … my unequivocal pledge’

Questioned about Labor’s latest campaign to persuade voters that Medicare was under threat of privatisation through a Health Department task force review, Mr Turnbull said: “It is a complete lie. Medicare is a core government service, we support it. It is a vital part of government services. It will never ever be privatised, it will never ever be sold. That is my pledge, my unequivocal pledge.”

While he was not an unqualified fan of outsourcing he acknowledged that the Medicare payments system had to be upgraded for the smartphone era but it would not be outsourced to private operators.

Mr Turnbull defended his pre-budget premiers’ conference idea to give the states a share of personal income taxing powers after the government had decided after Treasury assessment not to increase the GST to 15 per cent. All the premiers had rejected his idea.

Labor leader Bill Shorten made no commitment to restore the claimed $57 billion for future health funding beyond 2020 because the Gillard government’s original commitment was not funded in the first place, he said.

And when confronted by a video question from a distraught Iran-Kurdish refugee in the Manus Island offshore detention centre, Mr Turnbull held the government’s line.

While Australia had a “tough, harsh” policy, drowning at sea through people smuggler boats had stopped over the last 660 days, most detention centres had closed and the number of children in detention had dropped from 2000 to zero.

Mr Turnbull rejected criticism of the NBN repeating his assertions of a successful, cost effective roll out. He gave statistics of the percentage of NBN customers who had signed up for lower or higher download capacity plans. The NBN was meeting the market demands of its new customers, he said.

Often brought back to the point of questions by presenter Tony Jones, at one point an annoyed Mr Turnbull accused Mr Jones of working for the Labor Party.