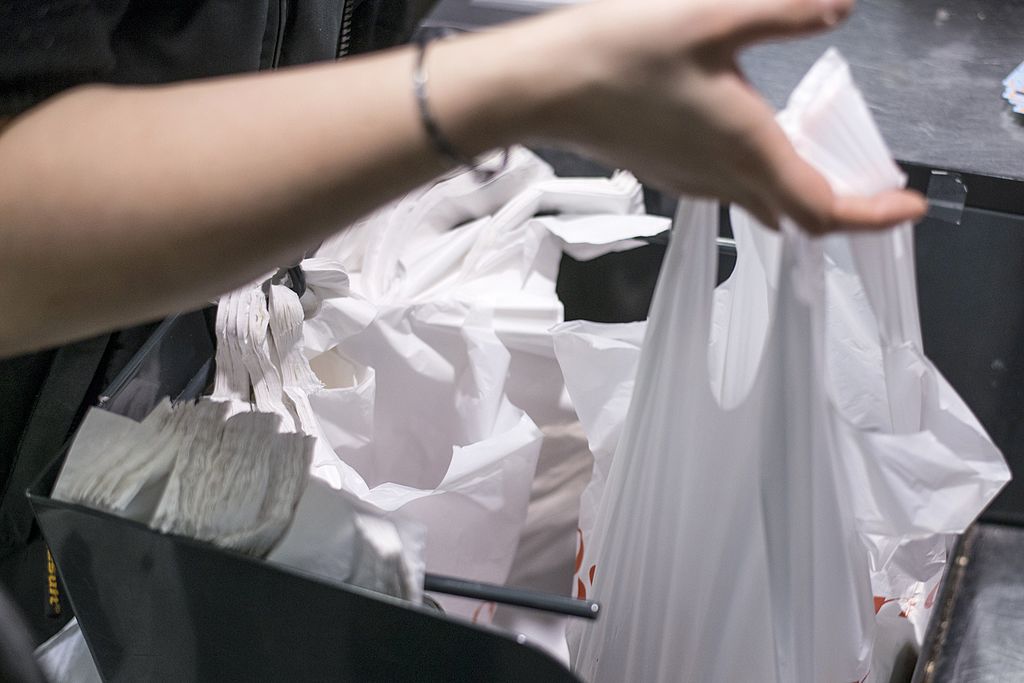 When you do the maths on Australia’s plastic bag problem the statistics are jaw dropping.

Australians use about four billion lightweight supermarket shopping bags annually – that’s 170 bags for every man, woman and child in the country.

But if you add all other types of plastic bags to the mix, the number ventures into the realm of the absurd.

That total has been put as high as 14 billion – or a staggering 606 bags per Australian, per year.

And almost none of them are being recycled.

Clean Up Australia says just three per cent of the four billion lightweight grocery bags used each year are recycled at limited collection points in supermarkets.

But the rate is almost certainly worse for heavier-duty bags, like the ones handed out by clothing retailers, because there are even fewer collection points.

All the rest – the vast majority of those billions and billions of bags – end up in landfill, and increasingly in the sea where they are taking an undeniable toll on marine life.

Marine biologist Dr Kathy Townsend told a recent Senate inquiry that she finds plastic bags in the stomachs of about 40 per cent of turtles found dead in Moreton Bay, off Brisbane.

Turtles commonly mistake bags in the water for jellyfish, and they die long, agonising deaths as their digestive systems clog up.

Lord Howe resident and researcher Ian Hutton told the inquiry of a flesh-footed shearwater he found rotting on the World Heritage-listed island. It’s stomach filled with no fewer than 274 small pieces of plastic.

Subsequent studies found evidence shearwater chicks are being fed plastic in the nest.

Clean Up Australia managing director Terry-Ann Johnson says the statistics on plastic bag use are alarming, and it’s time for Australia to refocus attention on the damage they’re doing to the environment.

She says consumers can simply say no to plastic bags, which will exist in the environment for anywhere between 200 to 1000 years depending on where they end up.

She says shoppers who use plastic bags should make make the effort to return them to collection points in major supermarkets.

“These bags can be recycled but they’re not being recycled because it’s seen as a hassle,” she tells AAP.

“The result is that Australians throw away about 7150 recyclable plastic bags every minute.”

WHAT YOU CAN DO:
• Say no to plastic bags; use reusable ones instead
• If you shop online, send bags back with the driver
• Return bags to stores that collect them for recycling
• Challenge your cashier about how many bags they use
• Pressure your council to introduce kerbside collection for recyclable bags
• Double up: If you take a bag from a retailer use it for other purchases
• Stop using plastic bags as bin liners; use newspaper and rinse your bin

Australia is drowning in plastic bags