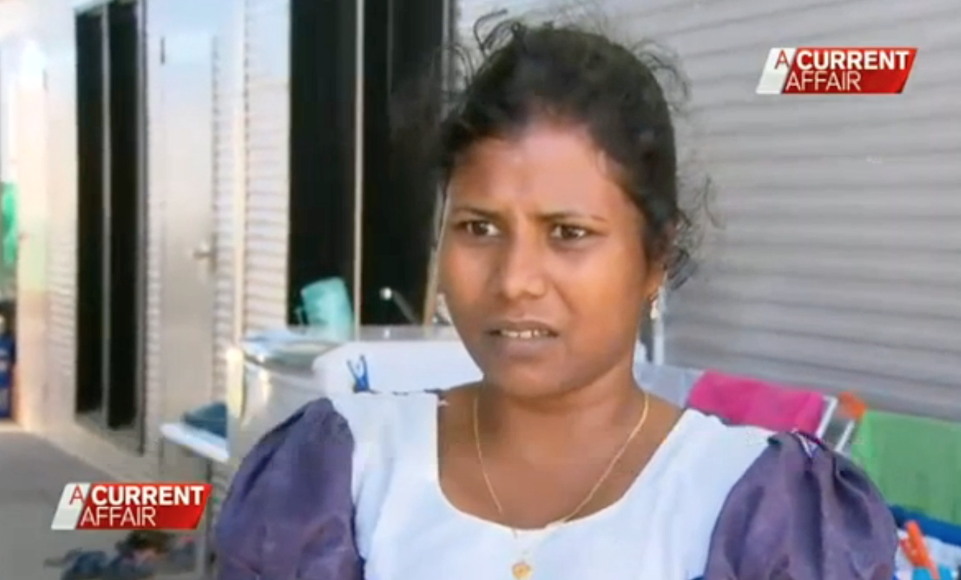 An exclusive behind-the-scenes report on Australia’s regional processing centre on Nauru has revealed that a female refugee on the island felt so threatened she had to get married because “single ladies cannot be living here” due to “very bad people”.

The A Current Affair (ACA) story that aired on Monday was only the second time Australian journalists were allowed to film on the island. ACA maintained the Australian government did not help them secure access.

“Now I got married because of here is very bad people … Single ladies and everyone cannot [be] living here,” Sri Lankan refugee Valina said during the report.

“Here everything is problem,” she said. “I don’t like living here. Here is very bad, bad people. Nauru is very bad.”

There have been numerous accounts of sexual assaults of asylum seekers and refugees on Nauru, with some victims becoming pregnant and needing to travel to Australia for abortions.

Since October 2015, those in Nauru’s regional processing centre have been allowed to move freely around the island. But given reports of violence, particularly sexual violence toward women, this “freedom” was not welcomed by refugees and asylum seekers.

One refugee, a Pakistani man who had not seen his family for three years, said he was constantly threatened by locals.

“Everywhere in the island it is a lot of trouble for us,” he said. “They’re swearing, stealing our bikes … after 7 o’clock I don’t want to go outside from my accommodation.”

A child said: “It’s hot the houses are so bad. Nauru is so bad. It’s bad, they [Nauruan children at school] spit in our lunch, they fight us they pull our hair.”

Iranian refugee Mustafa, who opened a restaurant on the island named ‘Bondi Beach’, had the most harrowing story.

“I try fire [burn] myself with petrol. I have pain,” Mustafa said. “I cannot eating, my weight down, everything bad to me and nobody know about my feeling bad … after that [self-immolation] the police catch me and for one month I stay in jail, for nothing.”

‘There’s not much to complain about’

The story detailed the complaints, heartache and difficulties faced on Nauru but also showed what could be considered a more favourable account of conditions.

For example, reporter Caroline Marcus spent a lot of time in the new area of the camp where women and children lived in solid structured accommodation with air conditioning, instead of tents, and amenities like televisions provided. She later said the tents she saw were “cramped and covered in mould”.

He also claimed parents of Nauruan children wanted to pull kids from school because refugees and asylum seekers were making threats of violence.

Nauruan justice minister David Adeang said: “There is not much [for the refugees and asylum seekers] to complain about.”

He claimed some had made up stories about being physically and sexually assaulted on Nauru to “influence the Australian public”. He said refugees were “certainly” living better than Nauruans.

The reporter assured viewers that ACA did not promise the Nauruan government it would cover the centre favourably. She also said no refugees were filmed or interviewed without consent.

She said Australian immigration minister Peter Dutton did not know about the story until the ACA crew was on the island.