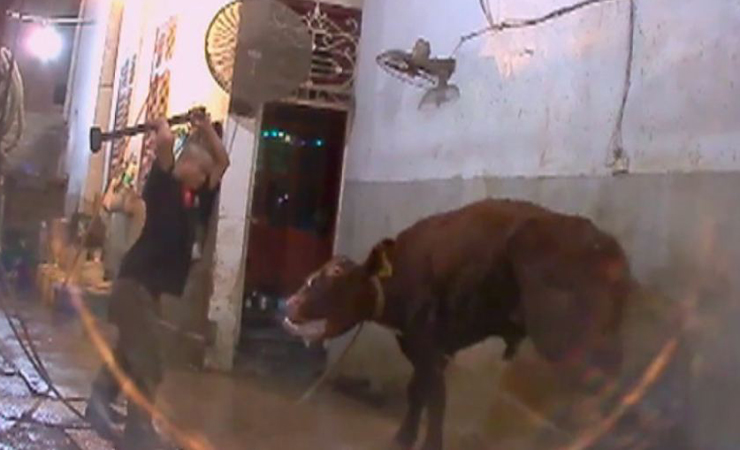 A leaked email from within the live export trade seems to suggest the industry put dollars and profit before welfare of animals.

After viewing brutal pictures of Australian cattle sledgehammered to death in abattoirs in Vietnam, the chairman of the Australian Livestock Exporters’ Council, Simon Crean, was adamant animal welfare was a priority.

“I’m shattered … This is the very thing that I, along with the industry, have committed to end,” he said.

But the email obtained by the ABC paints a vastly different picture.

It is written by Dr Michael Patching, Meat and Livestock Australia’s Vietnam-based manager.

He says, “The purpose of the meeting was to try and get them together to talk about the recent suspensions” because of compliance breaches by Vietnamese importers.

“If you put them under pressure, they will find a solution that will beat the system (eg: tunnels in French and American Wars)” Dr Patching said of the Vietnamese importers.

It appears Dr Patching was referring to extensive tunnelling systems used by the Viet Cong to help combat French and American troops in the 1950s, ’60s and ’70s.

Dr Patching concludes the email by appearing to urge exporters to put dollars before welfare.

“We need to keep working with them to make their companies more profitable and less emphasis on compliance to regulations,” he said.

“It was Meat and Livestock Australia that [were] actively involved in facilitating the cruelty of cattle in Indonesia, so to now see them encouraging profits over compliance in Vietnam, when non–compliance means sledgehammering cattle, is just appalling” she said.

The ABC raised the internal email with Mr Crean, who said, “We don’t want them to beat the system. If they beat the system … we’ll close them and then they will be out of business”.

Mr Crean was a party to the original email.

He said Dr Patching’s suggestion exporters focus more on profit than compliance was, “essentially saying it is better to use the carrot than the stick”.

“If we are not encouraging them and helping them to become a profitable industry they will cut corners,” Mr Crean said.

In the face of calls from the RSPCA to suspend the trade to Vietnam, the live export industry and Government have promised to investigate the latest sledgehammering revelations.

Ms White said she was not holding her breath.

“To put it bluntly, I don’t trust the industry. They have a track record of cruelty, corruption and cover-ups and this is a PR response,” she said.

“They are in damage-control because this is their worst nightmare that we have documented once again.”