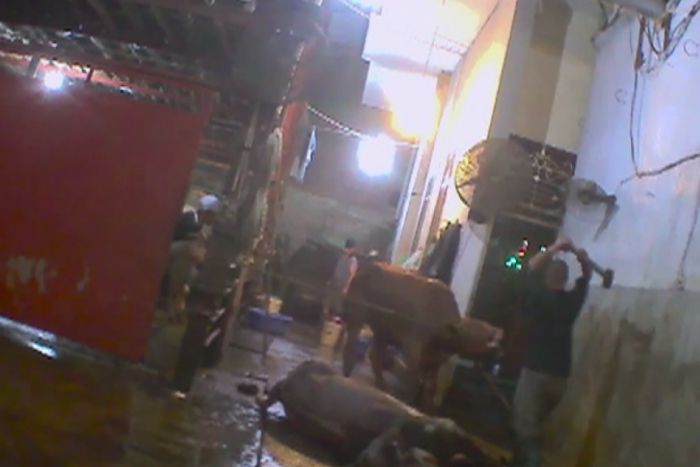 The Australian government has suspended trade to three abattoirs in Vietnam after footage emerged of workers killing what appear to be Australian cows with sledgehammers.

Animals Australia published footage on Thursday showing one abattoir worker clobbering a live cow over the head five times before it fell to the ground, eventually dying.

“I thought I’d seen it all, and I haven’t,” Animals Australia campaign director Lyn White said of the horrific footage, labelling it the “most shocking” thing she’d even seen.

Deputy Prime Minister Barnaby Joyce said he would not consider a ban on live exports, but had suspended trade with the abattoirs in question, many of which Animals Australia claimed fail to adhere to Australian standards.

Australia exports live cattle to Vietnam – its second-biggest customer – on the condition that cattle are transported to approved abattoirs.

The footage suggests some Australian cattle are instead being transported to brutal, unapproved slaughterhouses.

The Vietnamese workers who were secretly filmed reportedly told Animals Australia the cattle were from Australia, and notches on their ears reportedly matched Australian animals.

Mr Joyce said the government had moved quickly after being shown the footage.

“Immediately when we found out about this we went straight into action,” he told the ABC.

“The Department [of Agriculture] has been working closely with the industry, the abattoir has been suspended from receiving cattle, we are investigating this process but further action needs to take place and will take place.”

According to Animals Australia, identity tracking tags had been removed from the cattle’s ears, which they described as “deliberate corruption” of the system.

“They know that the ear tags are not meant to be in the animals at these locations so there’s quite deliberate corruption of the system that’s going on that has meant that Australian cattle are ending up in these traditional slaughterhouses,” Animal Australia’s Ms White said.

Ms White said the disturbing footage was first shown to the Australian Livestock Exporters’ Council (ALEC) in March, but they were forced to go to the media after ALEC did not respond for six weeks.

ALEC chair Simon Crean, a former Australian politician, said he would take “every step” to stop any exporter found to be breaching strict guidelines from supplying to Vietnam.

“I’m shattered. I mean, you look at that – it’s inexcusable,” Mr Crean told the ABC.

But he said he did not believe stopping Australian exports was the answer.

“Take Australia out of the market, that sledgehammering will continue,” Mr Crean said.

“I want to stop it, but you’re only going to stop it with Australia in the trade.”

Mr Crean said Animals Australia had brought similar evidence to the council before but was never given a response.

“That is a failing on our part.”

The opposition responded to the crisis by criticising Mr Joyce’s handling of the live exports industry.

“We are now seeing public trust and confidence in the industry undermined because Barnaby Joyce has left the regulatory regime struggling to keep pace in his attempt to open new markets too quickly, all for his own political gain.”

Labor’s spokesman did not call for a ban on live exports.

This isn’t the first time Australia has suspended live exports due to horrific claims of animal mistreatment.

The Department of Agriculture told the ABC an investigation was ongoing.

“The footage … depicts abhorrent and indefensible treatment of cattle at an abattoir not approved to receive livestock exported from Australia,” it said.

“A thorough investigation of this evidence has begun.”

‘Australian cattle’ being bludgeoned in Vietnam