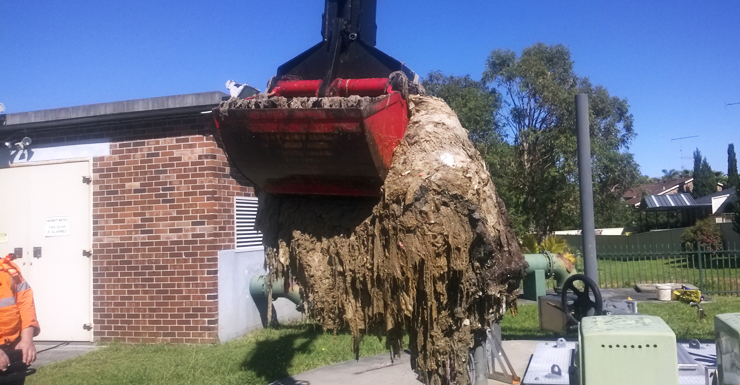 Fatbergs are the scourge of Australian waterways. Photo: Sydney Water.

Water authorities are warning consumers to flush only “pee, paper and poo” down their toilets as the Australian Competition and Consumer Commission (ACCC) escalates a probe into whether cleaning wipes are causing widespread damage to pipe systems across the country.

Sydney’s sewerage system is one of the worst affected by the “fatberg” problem, according to Sydney Water, which said it spent $16 million in the last two financial years replacing pipes clogged by wipes that are marketed by companies such as Kleenex as “flushable”.

The national cost is estimated by the Water Services Association of Australia to be $15 million a year.

• Flushing these down the toilet may cost you $16k
• Woolies, Coles should head lesson from Aldi
• ‘Bogans feel solidarity’: the evolution of Aussie accent

However, the total cost to taxpayers and consumers is likely to be higher because it does not include remedial work commissioned by local governments and individual property owners.

“This is a global problem that wipes don’t break down,” Sydney Water spokesman Peter Hadfield told The New Daily.

“This inability to break down comes with a significant associated cost to water utilities and consumers across the world.”

Mr Hadfield confirmed that the ACCC had launched an investigation into the crisis and that Sydney Water was assisting in the probe.

“Consumers across the country need to stop considering their toilet to be a garbage bin with water in the bottom of it,” he said.

“Everyone should remember the three Ps – the only things that you should flush down your toilet are pee, poo and [toilet] paper.”

“Kleenex seems to have an obsession with trying to convince people to flush these products, when the fact is they can clog up your pipes and be rough on your wallet,” CHOICE spokesman Tom Godfrey said in a statement.

“Although the new wipes disintegrated more than the old wipes, they didn’t break down fast enough and we believe they pose a blockage threat particularly in the first several metres of pipe on the consumer’s property.

“Oddly, although the company insisted their old wipes were ‘flushable’ they have decided to reformulate the product.”

Watch the results of one of CHOICE’s tests here:

The consumer advocate is now calling on the ACCC to force Kleenex to remove all references to flushability from the packaging of the wipes.

“Kleenex claims that their old and new wipes meet guidelines for flushability but these guidelines were written by industry, for industry,” Mr Godfrey said.

CHOICE wants consumers to join its campaign to force manufacturers like Kleenex to change their ways.

You can participate in the campaign by following this link.