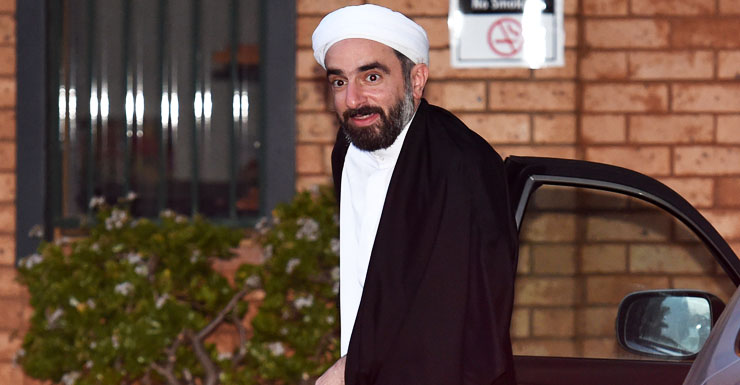 Anti-gay Islamic cleric Farrokh Sekaleshfar has fled Australia after his presence in New South Wales at the same time as the Florida shooting sparked condemnation.

The Shia cleric arrived in the country on June 7 on a valid visa and was a guest of the Imam Husain Islamic Centre (HIC) in the Sydney suburb of Earlwood. He told the ABC on Tuesday night he was leaving because “HIC thought it was in my best interests and for the best interests of the community”.

Sheik Sekaleshfar spoke in March at an Islamic centre in Orlando, Florida, just weeks before Omar Mateen perpetrated the worst mass shooting in US history on Sunday by shooting dead 49 and wounding 53 at an Orlando gay nightclub.

In years past, the cleric said homosexuality is a sin under Islam and should be punished with death.

“This is a legal matter and has to be dealt with in the appropriate way, but his visa is being reviewed at the direction of the [Immigration] Minister even as we speak,” Mr Turnbull told reporters on Tuesday.

The Prime Minister said Australia had “zero tolerance” for preachers of hatred. He was echoed by Immigration Minister Peter Dutton, who said he was unaware of the cleric’s presence in Australia until Monday, and that the government “won’t tolerate people who are preaching hate”.

Labor leader Bill Shorten said he was astonished the cleric was ever granted a visa. “I think the government needs to get onto it quick smart, and this person, in my opinion, is not welcome in Australia holding those abhorrent views.”

The cleric granted an exclusive interview to the ABC on Tuesday in which he denied any link to the Orlando “animal”, and sought to clarify that homosexuals should only be killed in Islamic nations under certain circumstances.

‘No links to Orlando shooting’

Sheik Sekaleshfar publicly denounced the Orlando shooting the morning after.

“The killing of innocent life is never justified by religion,” he wrote in a now deleted Facebook post.

“The perpetrator of this shooting has directly violated this holy commandment and displayed a complete disregard for the sanctity of human life and divine values.”

The cleric repeated this denunciation in his exclusive ABC interview.

“Forgive me for saying, but that animal, they are connecting me to him. Not at all. He was an ISIS sympathiser, yeah. A follower of Baghdadi. These people are criminals.”

Was deportation a certainty?

In the 2013 sermon, Sekaleshfar said homosexuals “waste themselves and society” and disrespect women by shunning sexual relations with females.

His visa was to be reviewed under section 501 of the Migration Act, which gives the Immigration Minister the power to cancel a visa if he reasonably suspects a person fails the “character test”, with no recourse for appeal.

Conservative politician Senator Corey Bernardi told The Australian the matter was proof of double standards in the visa granting process.

“I’m sure it is not lost on many when we hear of anti-abortion advocates being banned from our country or elected politicians like [anti-Islamic speaker] Geert Wilders experiencing visa problems and yet we allow this bloke and attendees for the Hizb ut-Tahrir global conference to come and spread their poison in Australia.”