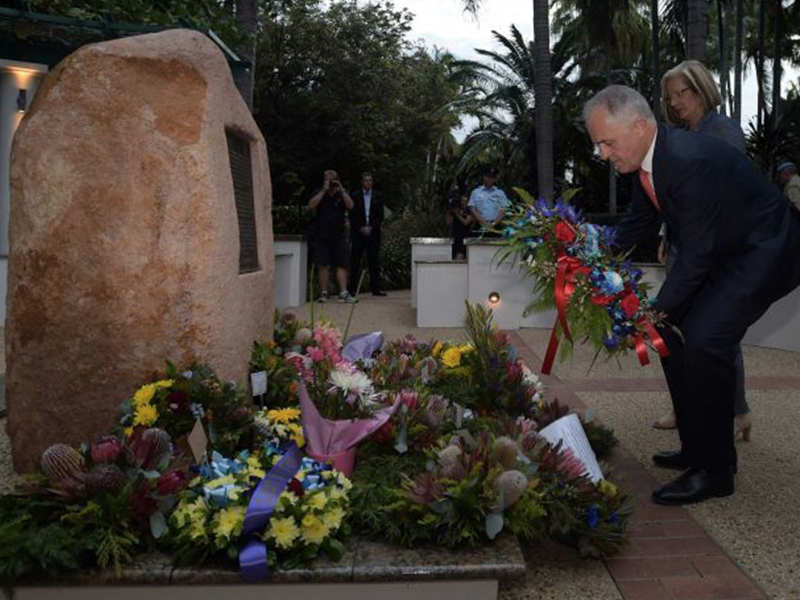 Services have been held in Townsville, Sydney and Perth to mark the 20th anniversary of a Black Hawk crash which claimed the lives of 18 soldiers.

In June 1996, two helicopters collided mid-air near Townsville, while the troops were carrying out a counter-terrorism training exercise.

In Townsville, the Chief of Army Lieutenant Angus Campbell said the lives of the men were lost “for the sake of others”.

Crash survivor Gary Proctor also delivered an emotional prayer and the service ended with a Black Hawk flyover and the playing of the Last Post.

Prime Minister Malcolm Turnbull and Opposition Leader Bill Shorten, who were in Townsville on Sunday, did not attend the services at the request of the families but instead laid wreaths.

“We stand in solidarity with their families and friends they left behind, and we remember, as we always should, the very real risks and dangers the men and women of the Australian Defence force take every day as they keep us safe,” Mr Turnbull said.

“It is a very dangerous business defending Australia in war and, indeed, in training [and] peace time as well.”

About 100 people attended the service of remembrance at the St James Church in Sydney.

Helicopter pilot Kelvin Hales was among those who died.

His mother Fay Hales said the men believed in the importance of what they were doing.

“He told us all about it. He told us what could happen. He warned us if it did, he’d chosen to do it,” Mrs Hales said.

“And we found out later they all did the same thing with their parents. So we had to accept it because he did.”

The pain of losing her son remains raw after 20 years, Mrs Hales said.

“Sometimes it comes back and hits you,” she said.

Chaplain Rob Sutherland said some people questioned why “the best of our young men” were placed at risk.

“People were left with a lifetime of anger and guilt. They feel betrayed. The wounds are deep,” he said.

“Indeed the cost is high. The cost of not doing it, or not taking such risks is even higher.

“The cost of not protecting our nation is inconsiderable.”

A third service was also held at Campbell Barracks in the Perth suburb of Swanbourne.