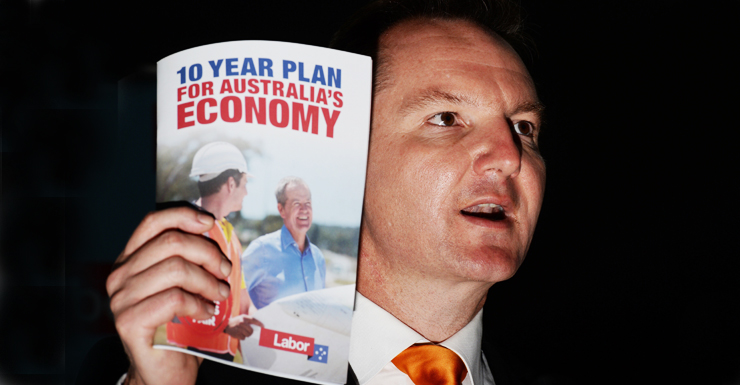 Bill Shorten’s four-year budget deficit is bigger than Malcolm Turnbull’s – something the Coalition is very keen to emphasise.

Labor’s frank admission that the party will deliver higher deficits to fund their health, education, GP rebate and child care policies may have given the Coalition a decisive political advantage.

But Mr Bowen refused, when asked by the interviewer, to echo the warnings of economists in recent days that spending profligacy will threaten Australia’s AAA credit rating – despite making the point himself in the past.

The interview came the morning after Treasurer Scott Morrison ridiculed Labor’s 10-year economic plan as “Zoolander economics” and a “picture book” with less substance than a Taylor Swift CD.

In the glossy booklet released on Wednesday, Labor said it would return the budget to balance by 2021 in line with the already Treasury and Finance-certified government strategy to reduce the deficit from $37 billion to $6 billion by 2021.

Mr Morrison jeered that Labor would “magically” deliver this result after four years of higher deficits and bigger debt.

But Mr Bowen said Labor had further revenue measures on top of negative gearing and capital gains tax reforms to announce before the election to demonstrate the fiscal credibility of its strategy. Combined, these measures would result in bigger surpluses beyond 2021, he said.

“We will defend the [AAA] ratings Labor earned … in the middle of the global financial crisis,” he told the ABC.

In the meantime, peak business bodies – the Business Council of Australia, the Minerals Council, the Australian Chamber of Commerce and Industry, and the Australian Industry Group – have joined forces to defend the stimulus benefit of the Coalition’s proposed cut to company tax to 25 per cent over 10 years, proving that economic management is squarely back in the focus of this campaign.

Parakeelia Pty Ltd: all above board?

Mr Jensen told the ABC’s 7.30 program on Thursday that as the member for Tangney he, with other Liberal MPs, was required to contribute $2500 from his electorate allowance to the Liberal Party’s company Parakeelia Pty Ltd.

The company assisted members to monitor their constituents.

Mr Jensen is running as an independent in the federal election after losing his endorsement to the party’s former state director. He has since been a vocal critic of the party and those who deposed him after the leaking of extracts from his fiction book Sky Warriors in which there was a graphically described sex scene.

Mr Jensen complained to 7.30 that he had been denied access to the Parakeelia data after quitting the party, while the program reported the Liberal Party explained this was because of a technical issue.

“The legitimate use was not the main use and as proof of that the taxpayer has paid for my feedback until November this year and yet the Liberal Party has removed my access to feedback and have given access to the Liberal Party candidate in my electorate,” Mr Jensen told 7.30’s Conor Duffy.

“It was a very clear understanding that there’s feedback training provided to staff members and basically the training is to use it as a database politically rather than to assist constituents. Indeed the instructions given by feedback trainees is: if there’s not a vote in it, don’t do it.”

Earlier on Thursday, Finance Minister Mathias Cormann defended the use of MPs’ funds for constituent software saying that similar arrangements were in place for other parties.

At this stage there has been no definitive answer to the public interest question raised from Fairfax Media’s original reporting of Parakeelia: exactly how much of the company’s donations to the party were sourced from taxpayer funds?

Quentin Dempster is a Walkley Award-winning journalist, author and broadcaster with decades of experience. He is a veteran of the ABC newsroom and has worked with a number of print titles including theSydney Morning Herald. He was awarded an Order of Australia in 1992 for services to journalism.

‘My deficit is bigger than yours’