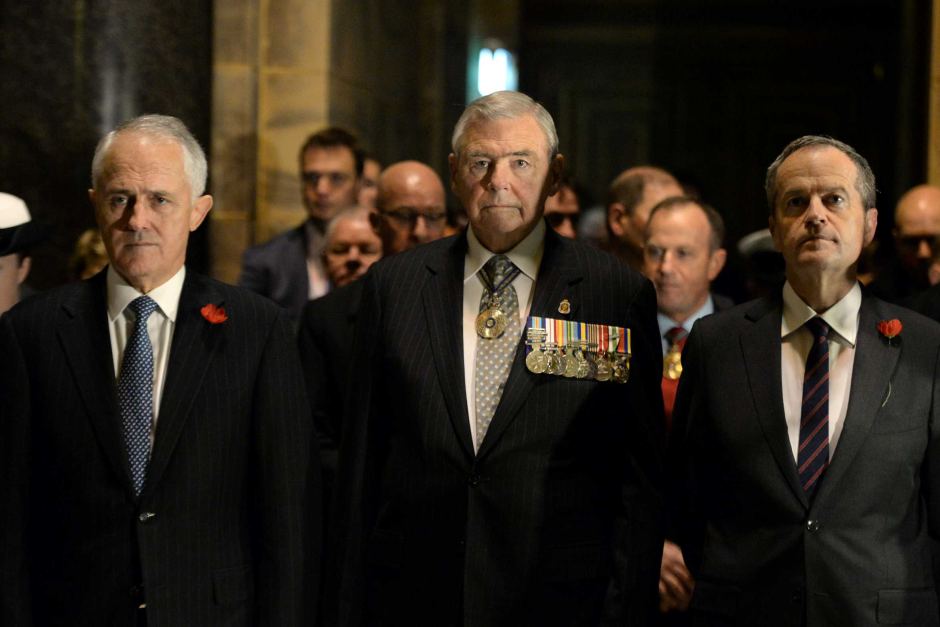 The national leaders have honoured the 100-year legacy of the Returned Services League and its assistance to veterans and families of fallen diggers.

Prime Minister Malcolm Turnbull and Opposition Leader Bill Shorten laid floral wreaths at the Shrine of Remembrance in Melbourne on a cold and wet Sunday afternoon.

The leaders put their hands on their hearts and had a moment of quiet reflection before stepping back into the line of dignitaries.

They both wore poppies on their lapels.

A catafalque party made up of Victorian Police shrine guards stood holding their rifles around the Stone of Remembrance during the ceremony.

RSL national president Ken Doolan read the ode and the Last Post was played followed by a minute’s silence.

Mr Turnbull was visibly overcome with emotion after the ceremony.

“The RSL honours our warriors, their families and cares for them, it has done the most remarkable service over 100 years,” Mr Turnbull told reporters.

“There is no better way to honour the service of those diggers from a century ago than to support our service men and women of today and their families.”

Mr Shorten said the RSL had assisted million of Australians and he was proud to participate in the ceremony with his political opponent.

“There are things in this country that are more important than the things that divide us,” Mr Shorten said.

He reflected on his own family members who had served in conflicts, some who returned home and others who made the ultimate sacrifice.

The inaugural national RSL conference took place in Melbourne on June 6, 1916 and this year’s conference is being held in the same city and on the same date.

Mr Turnbull and Mr Shorten are expected to address the RSL conference on Monday.

The RSL is urging the leaders to overhaul the veterans support system in Australia.