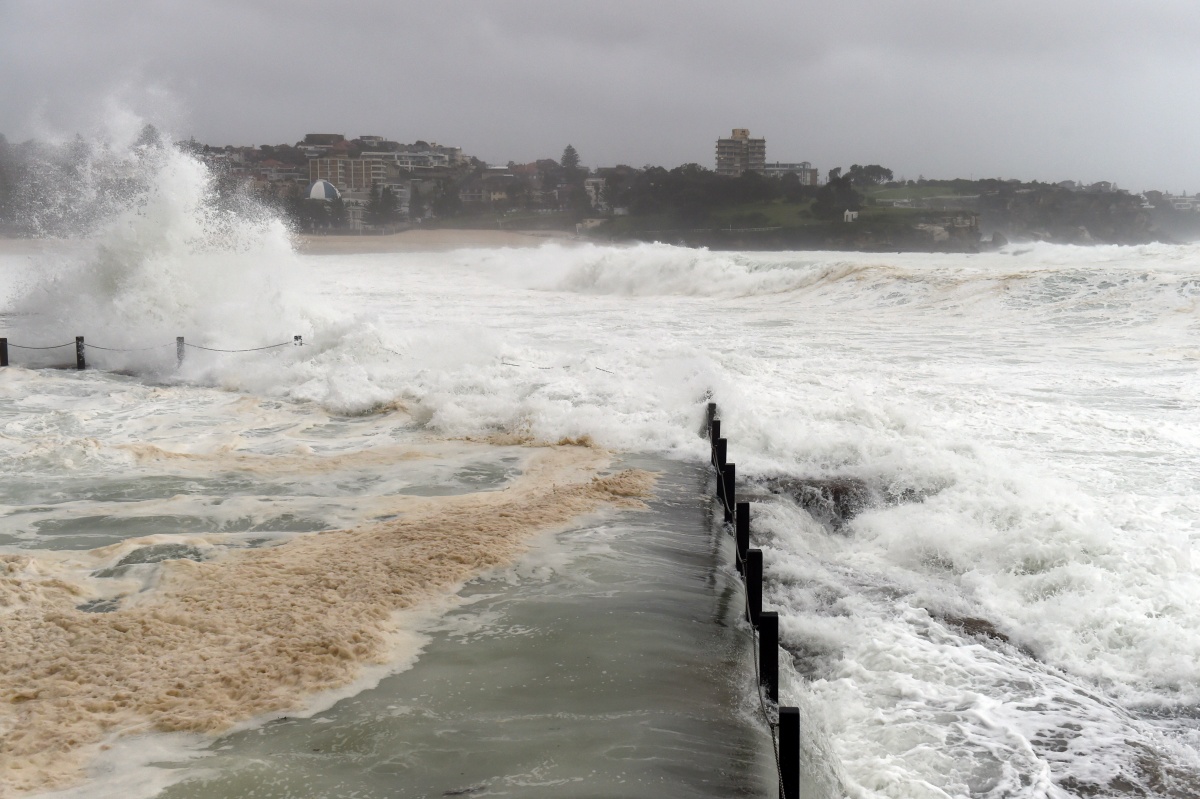 Australia’s east coast has endured a horror weekend of damaging rain and wind, with New South Wales’ emergency services inundated by thousands of calls for help as destructive weather lashed vast areas along the eastern seaboard.

But as the northern states mopped up, Victoria and Tasmania were being warned to brace for torrential rain, severe winds and potential flooding as a slow moving but intense low pressure system moved the damaging weather south.

On Saturday and Sunday, the entire NSW coast was put on flood watch, while Brisbane suffered flooding, Hobart was battered and Melbourne was soaked with constant rain.

NSW Minister for Emergency Services David Elliot confirmed the SES had received more than 8000 calls for help and carried out 100 flood rescues over the weekend.

The SES issued a flood evacuation warning for residents living along the Georges River, in Sydney’s south-west. Late on Sunday, 35 properties at Chipping Norton were evacuated as the Georges River continued to rise.

Meanwhile in Adelaide, Perth and Canberra, temperatures sat in the mid-to-low teens and rain kept falling.

The deluges came after warnings from the Bureau of Meteorology, which forecasted higher-than-average rainfall for large parts of Australia during winter.

A 13-metre wave was recorded at Crowdy Head on the mid north coast, while waves averaging four to six metres hit Sydney’s beaches.

Severe weather warnings and evacuation orders were in place for areas on the NSW coast up until Sunday night when the storms were set to peak once more.

Floodwaters peaked at 9.1 metres in Lismore. Picton, south-west of Sydney, was inundated by floodwaters, with a number of shops damaged in the deluge.

These guys went around to South Curl Curl pool + were removed from the pool by the police. #deewhy #sydneystorm pic.twitter.com/Kx0z6uJzf5

Fair to say we’ve taken a bit of a beating in the #SydneyStorm… Garden closed for the rest of the day #Garden200 pic.twitter.com/ILd3f0AUdF

While only dumping about five millimetres of rain in the city, the BoM forecasted the wet, windy and gloomy conditions would continue in Melbourne on Monday and Tuesday. Heavier falls hit Gippsland on Saturday night and Sunday morning.

An estimated 5000 homes and business were without power in Tasmania’s north and north-west on Sunday.

Roofing was reportedly torn off in north Tasmania, according to the Mersey area SES unit.

Motorists in north Tasmania were advised to stay off the roads following flooding, fallen trees and other debris on the road.

A severe weather warning for damaging surf was in place for people in the north east and east coast forecast districts.

A flood watch was in place for all Tasmanian river basins and areas in the state’s north.

In Brisbane, the carpark of the Toombul Shopping Centre was completely under water on Saturday. The floodwaters swept away parked cars before the city’s flash flooding and heavy rain dissipated by Sunday.

Assistant Commissioner for Queensland Fire and Emergency Services Kevin Walsh said the SES responded to more than 1000 calls for help.

“There was no major structural damage, there were quite a lot of leaky roofs and there was some inundation of homes and businesses but but far and away we dodged a bullet,” he said.

“We were lucky I think that there was no major damage, and we were really pleased with the messaging that went out to the community because they did heed most of the warnings — we only had a few people out in the flooded waters.”

A wet and windy winter

Australian rainfall was set to be above average from June to August, the Bureau of Meteorology predicted in its recently released monthly and seasonal outlook.

The southern mainland would be cooler with rainfall for “large parts” of mainland Australia to be up.

Wet and wild weekend a sign of worse to come