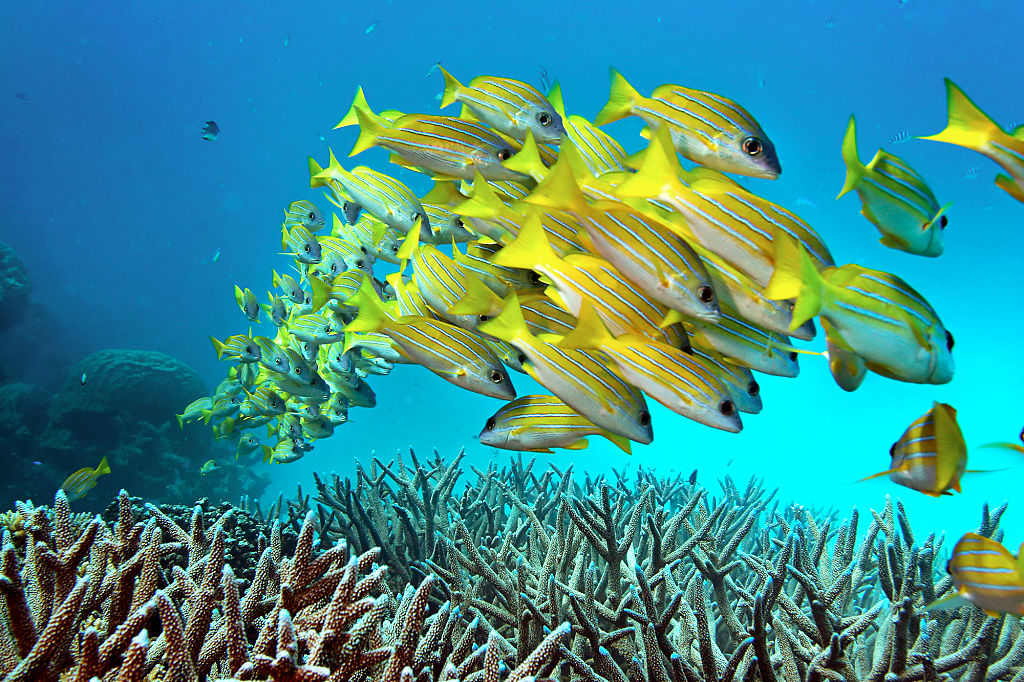 The reef is struggling under global warming pressure. Photo: Getty

Secret Queensland government modelling obtained by the ABC estimates it could cost up to $16 billion to meet water quality targets over the next decade to help save the Great Barrier Reef.

This figure dwarfs the funding commitments of both the major parties for fighting pollution in the reef.

The initial costings, which were formulated by an independent group of economic and water quality experts, were originally meant to be included in the final report of the Great Barrier Reef Water Science Taskforce released last week.

But the modelling was left out so it could be properly reviewed and tested. It is expected to be finished by next month.

But the ABC has obtained a copy of the preliminary modelling which warns that the cost estimate needed “to meet the 2025 targets for the GBR requires a very significant increase in investment from current levels … the total cost of meeting the targets … is $16bn”.

“It is a bit more than we thought, it does worry us,” said WWF’s reef spokesman Nick Heath when the ABC showed him the estimate.

“But it’s not out of the ballpark. I think it is a credible figure. It’s absolutely billions not millions that will save the reef, yet we’ve only seen millions from the major parties to date.”

The Turnbull government set aside $171 million in extra funding for the reef in the May budget, while federal Labor has pledged to spend $352 million on top of the Coalition’s commitment to help one of the world’s natural wonders if it is elected.

The greatest water quality threats to the reef have long been from pesticides, fine sediments and excess nutrients such as nitrogen.

The taskforce found that “while some progress is being made, it is not nearly rapid or widespread enough to achieve the water quality targets”.

Last week conservation groups welcomed the taskforce’s call for a legal cap on the sediment and fertiliser pollution flowing from river systems into the reef.

But they called for the costings to be released immediately so that reef funding could be properly debated during the federal election campaign.

“We feel there’s been a tendency over many years, over many governments of both sides of politics, to not even ask the question [about the cost of repairing the Reef] because they don’t want to know the answer,” said WWF’s Mr Heath.

Chief Research Officer with the Centre for Tropical Water and Aquatic Ecosystem Research at James Cook University (JCU), Jon Brodie, last month co-authored a paper warning the reef will be in a terminal condition within five years without a $10 billion commitment during this federal election campaign to improve water quality.

“[The $16 billion cost estimate] is generally in line with the numbers I published,” he said.

“There’s a real sense of urgency. If we’re going to manage water quality we have to do it now, and we’re not really seeing either of the major parties committing to spend anywhere near the right amounts of money to do that soon.”

The Water Science Taskforce modelling document says the range of cost estimates “summarised in this document should not be treated as definitive”.

But it states that the total estimated cost of delivering “all sediment abatement investments” could in fact be in the order of $33 billion, while nitrogen abatement could top $12 billion.

It says “targets would be exceeded if all investments occurred”.

In a statement, the Queensland Environment Department said the $16 billion cost estimate was currently being peer reviewed.

“While many stakeholder groups are interested in the results of the costings report, the chief scientist and the taskforce recognised it is important to ensure work was peer reviewed,” the statement said.

JCU’s Mr Brodie, who was involved with the review panel for the Water Science Taskforce, said the $16 billion estimate would not be the final figure.

“That’s all I’ll say,” he said. “We know we can solve the whole water quality problem for the Great Barrier Reef by spending about $10 billion.

“I think if we don’t do it soon then it may be in 10 years that money won’t be worth spending really. It’ll be too late.”