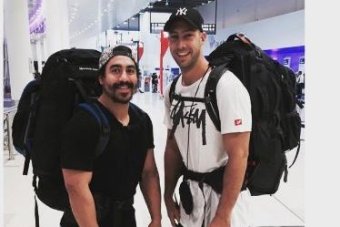 An apartment owner in Brazil has been questioned by police investigating the disappearance of missing Australian man Rye Hunt.

Mr Hunt, 25, left Rio International Airport in a taxi on May 21 after an argument with his travel partner Mitchell Sheppard, 22.

In a statement, Mr Hunt’s family said a person had since come forward, saying Mr Hunt checked into an apartment at Copacabana about 3:30pm that afternoon.

CCTV footage has also emerged of Mr Hunt being shown to the apartment.

He left the apartment about 6:30pm, leaving his laptop, camera and travel bags in the room.

Records showed a purchase was made on Mr Hunt’s card a few minutes later but it is not known what the item was, the statement said.

The apartment owner was questioned by police but Tortoriello said the interview had not produced any significant leads.

Speaking to the ABC’s NewsRadio, Tortoriello also said there were differing reports about the events prior to Mr Hunt’s disappearance.

The argument between Mr Hunt and Mr Sheppard was said to have been about their proposed trip to Bolivia.

Mr Hunt had left Mr Sheppard to get a coffee, with the intention of rejoining him at the airport 30 minutes later.

According to Tortoriello, police said the pair did not intend to meet again at the airport.

“The police chief told [me] that they didn’t plan to meet again at the airport half an hour later as his friend told the family,” Tortoriello said.

“The friend (Mr Sheppard) is not talking to the press, so we don’t know the reason of this argument. We don’t know actually why they split up.”

He said the friends were intending to fly to Bolivia on May 24 and went to the airport to perhaps get tickets in advance.

“According to the police, they just had an argument and then they split up,” Tortoriello said.

“Hunt takes a taxi to Copacabana and rented this apartment for three days because he was supposed to fly to Bolivia three days later.”

Family feels ‘out of the loop’

The family has expressed frustration about the pace of information coming out of Brazil.

Mr Hunt’s sister Romany said the CCTV footage had not been provided to them before being given to the media.

“It’s frustrating seeing footage that we’ve not had access to, that has not been sent to us,” she said.

“It makes us feel a little bit out of the loop.”

Foreign Affairs Minster Julie Bishop said consular officials were doing what they could.

“It appears that it’s a missing persons case, that’s how it’s been treated by the Brazilian authorities, but whenever we get information we pass it on to the families,” she said.

Family members are preparing to fly to Brazil this week, aided by a fundraising campaign that has raised almost $40,000 to help find him.

Mr Hunt grew up in Smithton in Tasmania’s north-west before moving to Hobart but has been living in Kalgoorlie since 2012.