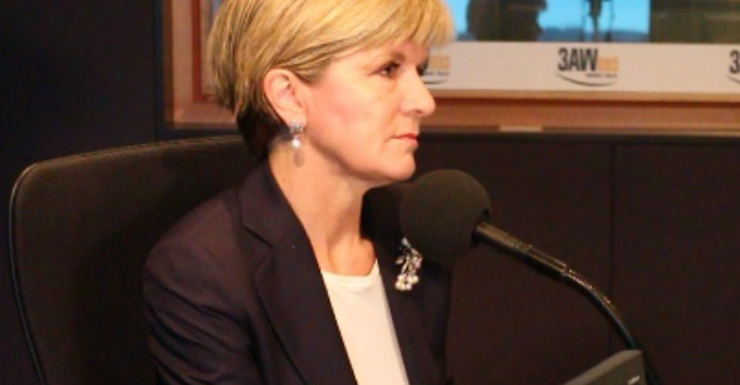 The Turnbull government’s reforms to generous superannuation tax concessions have come politically unstuck in an embarrassing radio interview on Tuesday.

While a $1.6 million cap on tax-free accounts was welcomed by analysts for putting a stop to super being used by high-wealth individuals as a tax minimisation sinkhole, changes to what is known as ‘transition to retirement’ arrangements are problematic for the less well-off.

After being asked repeatedly to explain the new TTR rules, Ms Bishop admitted she could not: “Well, Neil, this is obviously a gotcha moment … It’s not my portfolio …”

Senior Liberal Party figures should have been on high alert after 2GB shock jock Alan Jones last week called the super reforms “toxic” for battlers during his interview with Prime Minister Malcolm Turnbull.

The current TTR phase allows superannuants older than 55 to draw down designated sums from their super each year without incurring tax while they reduce their working hours pending formal retirement.

Under the 2016 budget reforms, earnings generated within the transition phase would attract 15 per cent tax. This would remove the tax incentive for most people under 60 to take on a TTR arrangement.

There is also a reduction of the current tax-concessional contribution cap of $30,000 to $25,000 a year. This is designed to inhibit the use of salary sacrificing by higher-income earners, but it will also hit lower-income workers trying to build up their retirement nest eggs late in their workings lives. This may contradict the government’s claim that only 4 per cent of high wealth superannuants will be affected.

Some sections of the superannuation industry and the Institute of Public Affairs have protested bitterly that the super accumulation cap reforms are effectively “retrospective”. Their complaints have been echoed by Mr Jones.

Opposition Leader Bill Shorten told Sunday’s ABC debate the government had created uncertainty and retrospectively penalised investment in superannuation: “No changes that the Labor Party has ever contemplated are retrospective.”

Significantly, Mr Shorten has omitted to declare if he will reverse the changes. Treasurer Scott Morrison seized on this omission, claiming Labor supports the changes.

“I welcome the fact that the Labor Party supports those changes. What these changes are about is an integrity measure that applies to the transition to retirement income streams,” Mr Morrison said.

“It means that those who are in that stream, that they will have a 15 per cent tax rate which is applied to that but once you get into the retirement phase, then you return to a position of zero tax on your earnings in that phase.”

Ms Bishop seemed to divert attention from a Labor pledge to extend the 2 per cent budget repair levy imposed by the Abbott government in 2014.

Shadow Treasurer Chris Bowen appeared to contradict his leader when he indicated the levy would be indefinite. That is … permanent.

Earlier, Mr Shorten said the repair levy would be for 10 years.

With another inflation benchmark to be announced on Wednesday, the Turnbull Coalition is sweating on news about Australia’s growth rate. Any downward trend will sap public confidence and have a political impact 32 days out from polling day.

The Fair Work Commission’s 2.4 per cent approved increase in the minimum wage, while not what the Australian Council of Trade Unions wanted, will be well received by Labor … and the Coalition.

It’s the umpire’s call, they will both say.

Another day, another poll?

The latest Essential poll published by Crikey now has the Coalition back in the lead 51 to 49 on two-party preferred.

On the important primary vote trend, the Liberal Party is steady at 41 per cent but significantly Labor has slipped from 37 to 35 per cent.

Mr Turnbull is nosing ahead, at least on this measure.