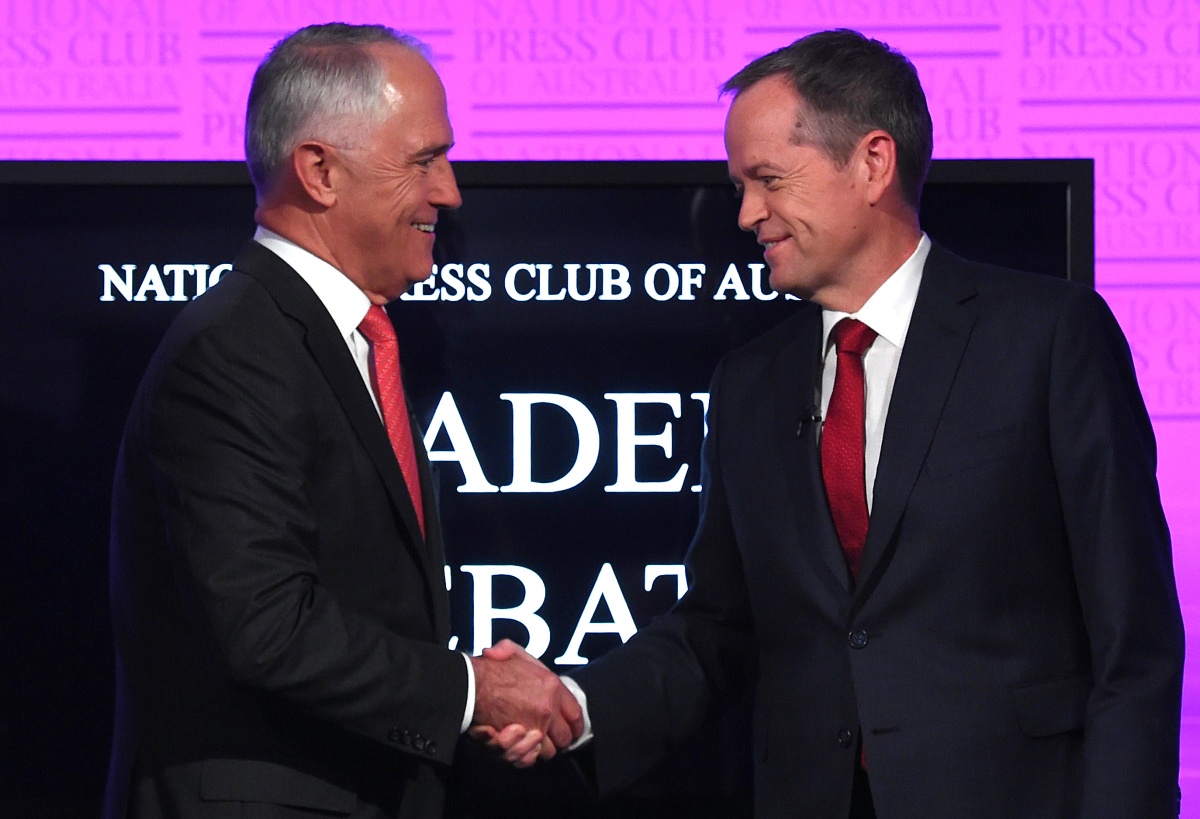 Prime Minister Malcolm Turnbull won the second of the televised election debates against Labor leader Bill Shorten on Sunday night, but only by a tiny margin.

A more confident Mr Turnbull, riding the momentum of a strong week in the campaign, painted Mr Shorten as passive – a leader with a list of complaints but no plan to fix them.

Although Mr Shorten won the coin toss, he let Mr Turnbull open the debate, broadcast live from Canberra’s National Press Club. This may emerge as a tactical mistake. It allowed the PM to lead with his jobs and growth plan and force Mr Shorten onto the defensive on just how Labor would grow the economy to generate the necessary tax revenues.

Mr Shorten was left to assert that a fairer tax system, and not Mr Turnbull’s $50 billion “handout to big business” through his promised company tax cut to 25 per cent, would deliver growth.

Mr Shorten, now a veteran of town hall-style public meetings, was considered the winner of the western Sydney Sky News debate a week ago with his friendly delivery of reassurances on health, education and renewable energy, unfreezing GP rebates and a devastating put down of Mr Turnbull’s implied defence of the banks against Labor’s plan for a royal commission.

But in Sunday’s debate, Mr Turnbull had the advantage after a week in which Mr Shorten and Shadow Treasurer Chris Bowen had to announce Labor’s abandonment of key promises to pensioners.

Although Mr Shorten repeated his denunciation of the company tax cut as unjustified and, in all likelihood, only a benefit to offshore shareholders, he could produce no rhetorical trump card. Mr Turnbull lectured him that economic growth and more jobs could only be delivered through business investment.

Mr Shorten compared Mr Turnbull’s plan to the economics of “Thatcher and Reagan” where if business came first some benefits might trickle down to others.

Mr Shorten scored points when he attacked the Turnbull government’s inconsistency over proposals to increase the GST to 15 per cent and to give the states their own income taxing powers.

“Now he says $50 billion of company tax cuts … that’s the idea to go forwards … We know that’ll generate 0.1 per cent growth in the economy and that is not going to justify $50 billion from our budget,” Mr Shorten said.

Mr Turnbull went for the jugular with his oft-repeated attack that under Labor people smuggling would likely resume.

“Shame on you Mr Turnbull,” Mr Shorten interrupted, pointing out that the ALP’s policy on boat arrivals was the same as the government’s.

Mr Turnbull also scored on climate change with Mr Shorten omitting to restate Labor’s policy to restore an Emissions Trading Scheme. Mr Turnbull did not mention an ETS even through he once supported a market mechanism to secure decarbonisation worldwide.

He said he had “paid a high price” for his acceptance of the science of climate change and remained committed to the Paris agreement which Australia would exceed.

Mr Shorten raised the issue of “retrospectivity” in the Turnbull government’s recent reforms of superannuation, saying this was “poison” for superannuants trying to build retirement nest eggs. Mr Turnbull noted that some wealthy people understandably complained about superannuation reforms but the government stood by their justification.

In one exchange over their personal politics, Mr Shorten jabbed: “I genuinely lead my party, whereas your party genuinely leads you.” It was a reference to a widely held view that Mr Turnbull has had to compromise his principles to accommodate Liberal Party backbenchers loyal to Tony Abbott.

Mr Turnbull countered that he was a known quantity with the Australian people.

While the debate seemed heavily scripted and many exchanges appeared repetitive or rehearsed, neither leader seemed able to secure the trust for which, polls show, many Australians now yearn.