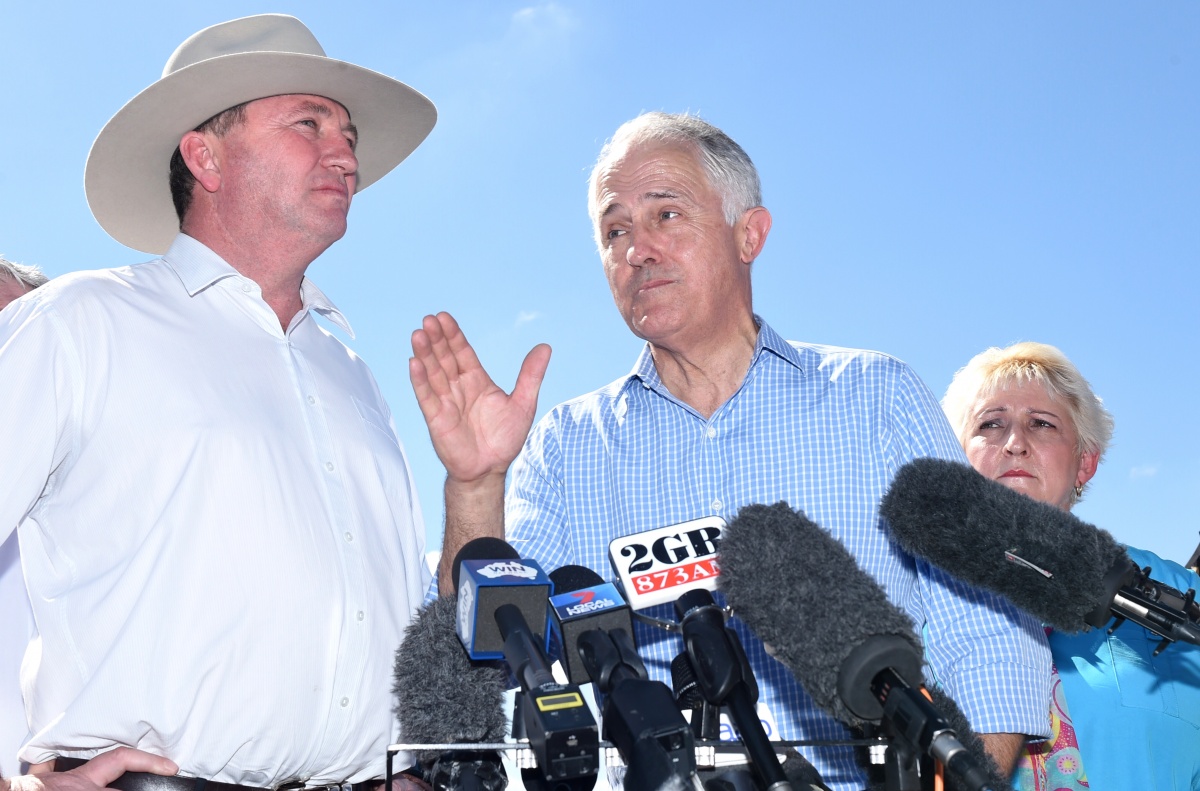 Both the Prime Minister and the Opposition Leader have been forced to repair self-inflicted damage by party colleagues.

It fell to Malcolm Turnbull on Thursday to mop up the diplomatic mess left behind by Deputy Prime Minister Barnaby Joyce.

“There is no link between people smuggling and live cattle exports,” Mr Turnbull declared.

He also heaped praise on Indonesian president Joko Widodo: “He is a good friend. He is a great leader, indeed an inspiring leader.”

The government’s attempt at “clarity” was considered necessary because of negative publicity in Jakarta arising from remarks by Mr Joyce.

At a regional leaders debate broadcast by the ABC on Wednesday, Mr Joyce implied that more asylum seeker boat arrivals started as a consequence of Australia’s 2011 ban on live cattle exports after animal cruelty was exposed at Java abattoirs.

Foreign Minister Julie Bishop called her opposite number in Indonesia to reassure him Australia meant no offence. Indonesian Ministry of Foreign Affairs spokesman Arrmanatha Nasir told AAP the remarks were a “pity” and the suggested link was “simply not true”, but cited Ms Bishop’s clarification.

But he said the Australian government’s swift attempt to clarify and downplay the remarks meant there was “a good chance” of containing the diplomatic damage.

No one seemed to remind the government of President Widodo’s repeated rejection of heartfelt pleas from Australia to stay the executions of Australian citizens Myuran Sukumaran and Andrew Chan. Convicted of drug trafficking in Indonesia, they were shot by firing squad on the direct order of the president in April 2015.

Labor powerbroker and MP for Batman, David Feeney, also caused his party embarrassment on Thursday with the fallout from his ‘car crash’ Sky News interview the night before.

Mr Feeney, who failed to declare his negatively geared $2.3 million investment property on his parliamentary pecuniary interest register, was unaware of key measures on school kids bonus and the pension assets test.

“I’ve been a little distracted over the last few days,” was his excuse.

Compounding the unwanted attention was Mr Feeney’s misadventure in leaving behind on a Sky News waiting room sofa his Labor Party ‘talking points’, the contents of which were immediately splashed with negative interpretation in the tabloids.

Mr Turnbull took a swipe on Thursday: “He seems to be a very inattentive minister.”

Mr Shorten, a factional ally of Mr Feeney, let him off lightly, acknowledging his colleague had had a rough few days and that he expected him now to attend to retaining his seat.

As Mr Turnbull and Mr Shorten went into repair mode, head to head debates will now test their fiscal credibility.

Treasurer Scott Morrison and Shadow Treasurer Chris Bowen will face off at the National Press Club on Friday to debate tax and spending measures.

Under the Australian Parliament’s Charter of Budget Honesty, the Labor Party has committed to having its costings assessed and published by independent audit well before the July 2 polling day.

“Chris Bowen needs to tell us what it all costs over four years, if he has any hope of being able to live up to his obligations under the Charter of Budget Honesty,” Mr Morrison said on Thursday.

“Tony Burke and I will be outlining the full impact of Labor’s policies on the bottom line,” Mr Bowen said.

This particular credibility test is expected to be crucial to the standing of each party as measured by the major opinion polls.

Labor has now confirmed it will not reinstate the school kids bonus and will not overturn Coalition changes to the pension assets test. The reason is said to be the need for budgetary discipline.

Mr Morrison jumped on to the news, saying the black hole debate had “flushed them out”.

Turnbull mops up after Barnaby